“Behind every portrait there’s a life story. It’s important not just to take photographs but also to include the name, the location – to break the aesthetic.”

In a break during the installation of a new display of her work at The Photographers’ Gallery, South African photographer Zanele Muholi is holding forth ardently about the lives of the black lesbian women and trans men she portrays, showing me their portraits alongside their harrowing testimonies of homophobic violence, ‘curative’ rape and extreme prejudice from the medical, religious, legal and political worlds. 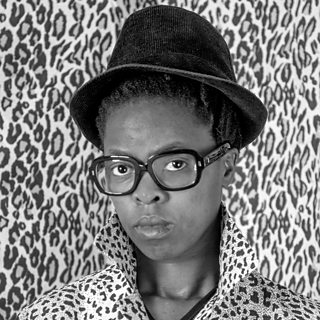 Muholi calls herself not an artist but a “visual activist” whose role is to bear and share witness, to honour victims and survivors, document hate crimes and sexual violence, challenge stigmatisation and silencing and expose failures in the criminal justice system.

“Fine artists deal with finery,” she tells me, “but I deal with painful material. I’m an artist who uses visuals for activism to deal with the many political issues that affect human beings.”

Her work combines two different kinds of rigour: that of a portrait artist representing a subject with humanity and honesty; and that of a humanitarian creating a historical record. It’s clear that she sees the two as indivisible.

The Photographers’ Gallery showcase of Muholi’s work is part of a broader exhibition honouring the four shortlistees of the prestigious Deutsche Borse Photography Prize, which is awarded to a photographer of any nationality for a specific body of work presented as an exhibition or publication. 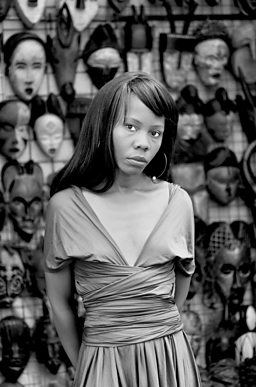 The prize is renowned for its internationalism and cutting-edge eclecticism and this year’s shortlist is no different, including Dutch fashion and fine art photographer Viviane Sassen’s vivid, sinister and angular abstracts, Russian veteran Nikolai Bakharev’s gawkily tender shots of bathers on Russian public beaches and South African/British duo Mikhael Subotzky and Patrick Waterhouse’s gritty images of Johannesburg’s decaying Ponte City apartment block, once the luxury residence of the white elite.

We are doing this in order to be counted. We’re speaking on the edge and challenging all forms of silence

Zanele Muholi is being recognised for Faces and Phases 2006-20014. Published in book form by Steidl, it’s an epic and beautiful project comprising portraits of more than 200 black lesbian women and trans men. The black and white images have an eternal gravity, serious and dignified – the absolute opposite of sensational – with the sitters usually at a three quarter angle, yet looking directly into the camera, expressions unsmiling and level.

“I like photos in black and white because they bring an element of timelessness, of the classic,” Muholi tells me. “Looking at where we’re at right now in the struggle [against homophobic violence], there’s nothing to laugh at, there’s nothing to enjoy except when one is intimate with her lover. I ask my sitters to think about the situation, think about being black, being a lesbian, being a woman.”

Muholi and I talk about the staggeringly high levels of sexual violence worldwide and she says: “Whether we show it or not, that violence is still happening. So what do you do? You show it. The work in itself is resistance.

“We are doing this in order to be counted. We’re speaking on the edge and challenging all forms of silence. It’s a painful situation, of course, but it helps many others. Slowly, by reading other people’s stories, people are coming out, talking about rape, being a survivor.” 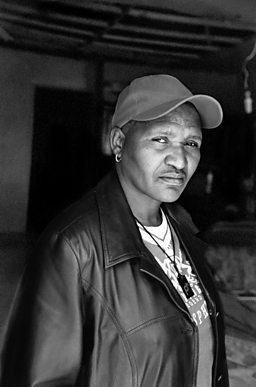 Muholi herself is certainly being counted, at least by the art world. Her CV lists one major coup after another, including showing at the Biennales in Venice and Sao Paulo, inclusion in permanent collections at the Tate Modern and the Guggenheim and exhibitions everywhere from Vienna to Lagos, Milan to Dubai.

People of colour were excluded from these kinds of spaces for years. Now we’re here and we’re showing the way for others

I wonder if she finds it distasteful that male sexual violence against black lesbian women should be served up for the patronising pity, horrified titillation or visual gratification of the Sunday afternoon gallery crowd.

She disagrees vehemently: “Showing [my work here] is political. Especially in this space. The very same kind of posh people who come here are the unconverted who should see this work.

“Black people, people of colour were excluded from these kinds of spaces for years. So now we’re here and we’re showing the way for other artists. And it’s not about me, it’s a whole community that’s being shown and being present through my work. I’m not displaying self-portraits.”

This gritty honesty extends even to presentation: Faces and Phases will be shown unframed and unprotected by glass. Muholi says: “Framing has to do with exclusion and distance, of being packaged for consumption. Being boxed in by a frame means you’re either prized or you’re a deviant held up to be studied. In shedding the frames we are shedding pain which is demanding to be freed.”

The Deutsche Borse Photography Prize shortlisted works will be on show from 17 April until 7 June at The Photographers’ Gallery, London. The winner will be announced on 28 May 2015. 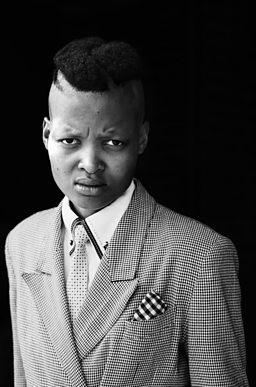 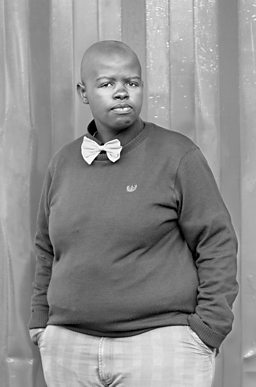 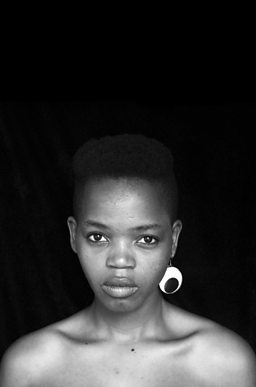 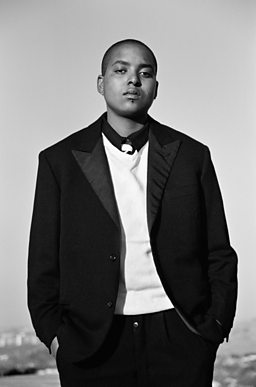 Tumi Mkhuma, Yeoville Johannesburg, from the series Faces and Phases, 2007 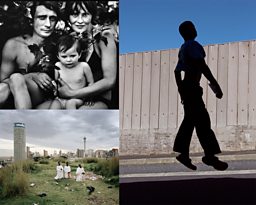