By Jane Mitchell, 16, from Dorset. 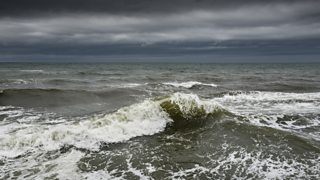 I believed we were going to die.

The storm was getting worse, as were the screams. The screams of the ocean. The screams of the people. Beating against my skull like the waves against the wood of the boat. Reaching out, I clutched my thin little girl close, the boat moaning threateningly as if it disapproved of the intimate gesture. Please God, help us, I thought. This wasn’t fair, not for her, my little one. Her three years of life on this earth had not yet provided her the joys of being alive, only grief and tears. There was so much I wanted for her, so many possibilities: her first day of school, her first kiss, her wedding. But she’d never get that now; we’d left one war only to be thrust into another. Was God truly this cruel? As if provoked, a profound screech grated against my ears as a large rusty pole collapsed onto the deck. A man screamed. I froze, a vile liquid swelling up my throat as I watched blood ooze down the man’s cheek in large clumps. I’m going to be sick, I thought, as I swept my daughter behind me and violently hurled over the edge of the boat. The dark waves mocked me below.

Shaking, I turned and stumbled over to the old man with the bloody face, the mass of people around me clutching their loved ones, others clutching anything on this broken ship that resembled stability. I still held onto my little one. “Please,” the man whispered, but he couldn’t muster any more words. Kneeling down, I placed my untrained hands against his skin, looking for the source of the blackening blood and what appeared to be a thin, straw-coloured liquid. I stopped breathing. His eye. His eye was gone.Choking back bile, I searched for something, anything absorbent that could be used to stop the bleeding. People saw my frantic stares, but were too frightened to let go of each other. Help me! I wanted to scream, but I knew it would do no good. Out here, on this death voyage, it was every person for themselves.

The bleeding was worsening. We had only come with the clothes on our backs and the memories of a home that had not yet been wrecked by war, so I was at a loss when it came to medical supplies. Thinking fast, I quickly slipped off my socks and knotted them end-to-end, a makeshift bandage which I tied as tightly as I could around the man’s face. He moaned an agonising whimper. It was only then that I remembered a distant day in school when my teacher had described bacteria and germs, but now, I did not have the luxury of clean cloth and sterile equipment to fight their authority. My grimy socks would have to do.

My baby girl was crying behind me. “shh, don’t cry!” I whispered, when the harsh whipping of the wind against the boat ripped through all of us like a hot knife through butter. I could hear people’s prayers mixing with the thundering of the sky and the contemptuous laughs of the ocean. The boat was shaking more vehemently now; I started humming the lullaby my mother had sung to me when I was a little girl, scared of the dark. Rubbing my hand up and down my child’s back, she let out a series of hiccupping- sobs as I sung our song, the memories of a distant land echoing in the winds above.

“Look!” Someone screeched. Hundreds of frightened eyes flashed in the direction of the voice. In the distance, a deep horn bellowed through the night sky, calling to our hearts, followed by the presence of a small yellow boat with several people on board. We all started crying and screaming at them, a cacophony of voices that rivalled the power of the storm around us. A small hint of relief shot through me, intertwining with the adrenaline coursing through my veins; my daughter might still have her firsts.

The man still whimpered next to me, clearly unable to see our hope brimming on the horizon. “It’s okay sir, we’re almost-”

“Mummy?” I hear, startled. I look up. There’s no boat. No mocking waves. No blood. Not anymore. Only my daughter: my brave little one, breaking me free of my reverie.

Snapped back into the present, I now see my little girl skipping towards me through the playground, her lovely dark skin no longer pinched by malnutrition but touched by the smooth softness of youth. She’s waving a picture of a butterfly, an excited, proud smile beaming across her face. She is beautiful.

But then I see the silent glares of the other parents; their fearful eyes that scream ‘go back to where you came from’. But never their mouths, no; only their eyes scream the words, as for mouths to scream them would appear too shocking. Too shameful.

They know nothing of what we’ve been through.

My baby girl runs into my arms, her malleable young mind having already warped the memory of the boat and the blood and the night. She shows me her picture, and I smile a smile that matches her own, if only with an intimation of sadness. I pick her up, breathing in her childlike scent, her hair blocking the hatred and the fear and the ignorance of this new world and I think, oh, my baby girl, my brave little one.

You will have your firsts.