Carrifran: How has rewilding changed this landscape in Scotland? 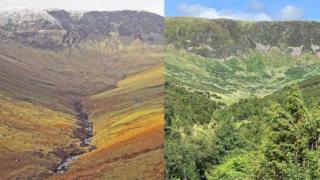 You might think these two photos are of different places, but in actual fact it is the same place 22 years apart!

This is Carrifran, a 1,600 acre valley in Scotland which was chosen to be an area for rewilding in 1996 by the Borders Forest Trust.

Back then the area had been used to graze farm animals, but the environmental group fundraised and bought the land in 2000, and began planting trees and shrubs to rewild the area.

Now 22 years later Carrifran is home to bushy forests of native trees, and creatures like foxes, kestrels and badgers.

How to make seed bombs - beware it is a muddy job!

How to build your own bug hotel

Put simply rewilding is all about returning land and oceans to a more natural - or wilder - state.

This often means doing nothing and letting nature take over to create more biodiverse areas.

Often animals or plants are introduced to an area, including species or similar species, that might have lived there previously but do not any more.

Chemicals, fertilisers and worming tablets are not used on the land or animals living there either.

You can find out more about rewilding in our guide here.

The charity, Rewilding Britain, says: "Rewilding seeks to reinstate natural processes and, where appropriate, missing species - allowing them to shape the landscape and the habitats within."

So unlike traditional conservation projects, the aim of rewilding is to create spaces where experts do not need to keep on looking after them and protecting the wildlife there in the future. 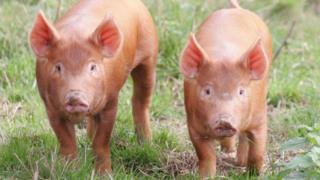 Getty Images
Tamworth Pigs have been introduced at the Knepp Castle Estate. They like to turn over the earth with their snouts or rootle, which helps plants to grow and species to thrive

There are different opinions about what land should be given over to rewilding.

Whilst all agree that taking action against climate change is urgent, how we do that is being widely talked about.

Some groups, believe it is import that fertile agricultural land, farmed to grow food, should not be rewilded, and other areas should be used instead.

The National Farmers Union (NFU), a group that represent farmers all over the UK, told Newsround that balance is important when it comes to helping nature.

Deputy President of the NFU, Stuart Roberts said: "rewilding projects must be carefully thought through to make sure they don't reduce our ability to produce food for the country.

"Rewilding large parts of agricultural land would mean having to bring in and eat more food from other countries that may not have been produced in a climate-friendly way, which would actually make the global climate change situation worse.

Food production and carbon capture are both very important and we need to be able to do both together."

Bug hotel: How to build a home for insects

How to make seed bombs - beware it is a muddy job!