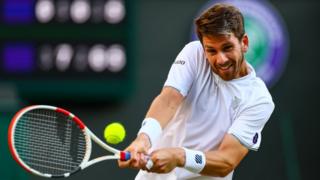 British number one Cameron Norrie is through to the Wimbledon semi-finals.

The tennis star is Britain's last shot at a win at this year's competition after several other big names were knocked out.

Norrie saw off Belgium's David Goffin on Tuesday in an exciting five-set match, coming from behind to claim victory after finding himself two sets to one down.

Want more of the latest at Wimbledon?

Cameron, who is the ninth highest ranked player at this year's Wimbledon and currently ranked 12th in the world, struggled to explain how he was feeling after hearing the crowds chant his name around Court One.

When asked for his reaction after beating his opponent, Norrie said: "Honestly? Speechless. I can't even talk.

"[I'm] so happy to get through with such a great team and such great family and friends here." 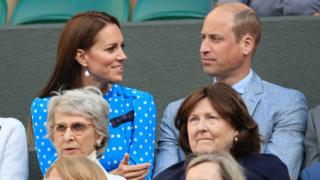 Getty Images
The Duke and Duchess of Cambridge were among the 11,000 fans at the match

Cameron thanked the 11,000 fans present at the match, which included the Duke and Duchess of Cambridge, for giving him the motivation he needed to go on and win the game.

"It wasn't going my way from the beginning and I wasn't feeling good and feeling the ball, and that was all credit to David, he was moving me and playing really good," Cameron explained.

"I couldn't find my game and then thanks to you guys, I managed to stay as patient as I could and it was all just adrenaline and I used my legs at the end and tried to put the ball in the court and it was great to get over the line." 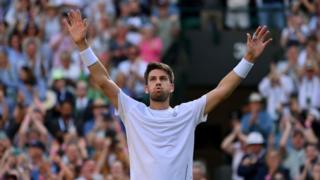 He will now face Wimbledon's defending champion Novak Djokovic on Friday at his first Grand Slam semi-final. Djokovic will be stiff competition for the Brit, having won Wimbledon an impressive three times in a row and six times in total.

The 35-year-old Serbian player was given a bit of a scare by Italy's Jannik Sinner before fighting back to win in five sets earlier on Tuesday.

"It great to get this now but it's only going to get tougher," Norrie told the Wimbledon crowd when asked about his upcoming match against the competition's highest ranked player.

"I'm going to take it to Novak and hopefully you guys can get behind me and I'm sure you will."

Do you have a good luck message for Cameron Norrie as he prepares for the Wimbledon semi-finals? Let us know in the comments!