Minions: Rise of Gru. What is the Gentleminions trend? 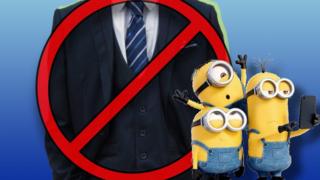 There's a new TikTok trend connected to the Rise of Gru Minions movie, but some cinemas are unhappy about it.

The trend, which is being shared under the hashtag 'Gentleminions', involves groups of mostly teenage boys attending screenings of Minions: The Rise of Gru, all dressed in smart suits.

Videos filmed for TikTok show the groups who, in tribute to the little yellow characters, carry bananas with them and clap together at the same time once the movie has finished.

Have you seen this trend at your local cinema? What do you think about it? Let us know in the comments.

Minions: Rise of Gru has already made millions of dollars since its release and has come out just as the school summer holidays are already underway for some children in the UK and on the horizon for others.

Universal, the movie studio behind the new Minions movie, tweeted their support for the Gentleminions trend.

The trend has also been acknowledged by the official Minions TikTok account, in a video posted at the weekend the account said: "Bobspeed you gentleminions" and "your time has come".

But, it appears that some of those copying the new Gentleminions trend have caused some disruption with their behaviour in some movie theatres.

That has now led to some cinemas deciding to ban children who turn up in suits, without an adult, from watching the film.

We are currently not admitting unaccompanied children wearing suits for 'Minions: The Rise Of Gru' This is due to the issues we have encountered over the last two days and its associated behaviour. Thank you. One cinema, the Regal in Wadebridge in Cornwall, posted a tweet that said: "Customer Notice: "We are currently not admitting unaccompanied children wearing suits for 'Minions: The Rise Of Gru' This is due to the issues we have encountered over the last two days and its associated behaviour. Thank you."

77 comments
Back to top
unknown