The author of the Luna Loves picture books will take over the role from the current laureate, Cressida Cowell.

He says he wants to break down the fear often associated with poetry and "get the nation writing and performing" it.

Joseph is the twelfth holder of the role, which is designed to help promote and champion reading and children's books.

New project to get more kids reading and writing

Who is Joseph Coelho? 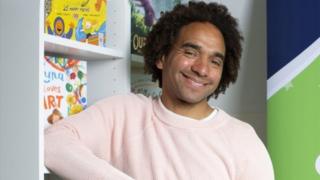 The writer was born in London and began writing poems in secondary school.

His works include the Luna Loves... picture books, the series Fairy Tales Gone Bad, as well as the novel The Girl Who Became A Tree.

Joseph says he wants to use his new role to "celebrate the power of poetry, to showcase new authors and illustrators, to diversify bookshelves and inspire bookmakers of the future, and champion public libraries and the role they play in communities".

He added that he hopes to "highlight and celebrate the power of poetry" as well as "to invite the nation, young and old, to write poems, to become poets."

Joseph will stay as Children's Laureate until 2024.

What is a Children's Laureate?

The job of the Children's Laureate is to get children excited about books, reading and writing!

But they can also focus on whatever they want.

Poet Ted Hughes and children's writer Michael Morpurgo came up with the idea of having a children's laureate.

They thought it was a good way to celebrate great work for children but also say 'well done' to writers and illustrators who had done really good work.

The Children's Laureate also does things like visit schools, appear on TV programmes and give out awards.

Previous holders of the post - which is usually awarded every two years - include Dame Jacqueline Wilson, Lauren Childs and Julia Donaldson.

What does a Children's Laureate do?