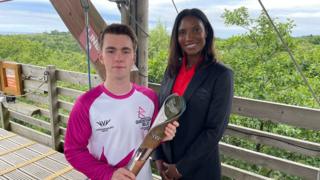 The Queen's Baton Relay has arrived back in the UK, ahead of the Commonwealth Games which begin later this month.

The final leg of the route will see it travel around England for the next three and a half weeks, before ending its journey in Birmingham at the opening ceremony on 28 July.

The relay began last October at Buckingham Palace, when the Queen placed her message to the Commonwealth into the baton and passed it to four-time Paralympic gold medallist Kadeena Cox.

Since then it has visited 71 nations and territories around the world. 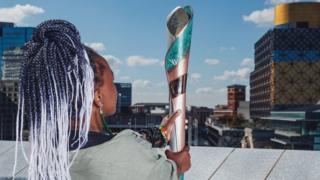 Birmingham 2022
This year's baton is high-tech and is home to a camera, a heart-rate monitor, atmospheric sensors and LED lighting. It was designed by Laura Nyahuye - an artist who was born in Zimbabwe and lives in Coventry.

In October the baton left the UK and headed to Cyprus to start its journey.

Travelling by land, air and sea, the Queen's Baton Relay route spans 2,500 miles, will take 294 days to complete and will travel to each of the 72 nations that make up the Commonwealth.

Amongst the highlights so far, the baton has spent Christmas in Seychelles, New Year in the Maldives and Easter in Jamaica.

The route is now finishing with a tour of England, as the nation is hosting this year's Games.

The Games take place every four years, it's an international multi-sport event, involving 72 nations and territories of the Commonwealth.

England, Scotland, Wales and Northern Ireland compete by themselves - there's no TeamGB at these Games!

The Commonwealth is a collection of countries that are linked to Britain in some way, all apart from Mozambique.

The national tour kicked off on Monday from the Eden Project in Cornwall.

The baton will travel the length and breadth of England, visiting 180 different communities.

It will spend two days in the South West of the country before moving to some well known locations including Canterbury, Nottingham Castle, the Lake District and Blackpool Tower.

Could you see the Queen's baton?

Here are just some of the places the baton will pass on its tour of England: 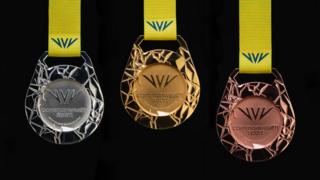 The route is set to attract crowds and have special events when it journeys around the country.

The baton contains a special message from the Queen, which will be read out at the Games' opening ceremony.

Commonwealth Games 2022: Check out the medals!

Commonwealth Games 2022: Queen's baton to travel 90,000 miles around the world