School meals: Caterers say some foods are off the menu

Some foods are disappearing from school dinner plates due to shortages and "out of control costs", caterers have told the BBC.

The people that supply meals to schools, called caterers, say they have had to reduce menu options, switching to cheaper meat from abroad or using more processed foods.

Laca, which represents school caterers across England and Wales, said a large number of its members were worried rising costs could affect the quality of school meals in the next academic year.

In response to the concerns, the government said it had "expanded access to free school meals more than any other [government] in recent decades".

It added: "We will also continue to keep eligibility under review and work across government to address rising costs, building on over £37 billion announced to help the most vulnerable."

Free school meals in Wales to begin next term

In a survey by Laca of school caterers, which provide meals for more than a million pupils, nearly all who responded said they had experienced food shortages.

They also said they had had to replace some foods with cheaper alternatives.

Things like beef, chicken, potatoes, pasta, oil, frozen vegetables and fish were among the hundreds of foods affected by rising costs.

One catering company which supplies almost 70 schools in Cornwall said they had taken beef off the menu because it was too expensive and now serve turkey more than chicken because it is cheaper.

Why do rising costs lead to shortages?

One of the reasons for rising food costs is the a rise in the cost of living - meaning lots of everyday things are becoming more expensive.

A rise in the cost of fuel for example makes transporting things much more expensive.

Inflation has pushed up the costs of certain foods.

The war in Ukraine has also had an impact on things like oils and grains.

Why are school meals so important?

For some children, their school lunch is the only hot meal they will eat in a day and caterers are saying that the rising costs could mean lower quality meals.

Laca wants the money for school meals, which comes from the government, to be protected.

In England, the government recently added 7p a day to the funding for the free school meals that all children can receive up to the end of Year 2. 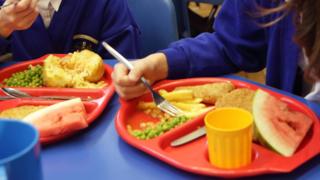 The number of older children entitled to free school meals because of low family incomes has risen this year in England to 1.9 million.

A government spokesperson said: "The increased per-pupil funding rate for universal infant free school meals amounts to approximately a £18 million per year overall, and will help schools continue to provide for the 1.25 million children in reception, Year 1 and Year 2 with a free, healthy and nutritious lunch."

In Northern Ireland, 28 percent of primary school aged children can get a free school meal.

While Scotland and Wales have recently committed to rolling out free school meals to all primary pupils.

What is your favourite school meal? Have you noticed any changes to the menu?

Packed lunches: How healthy is your ideal lunchbox?