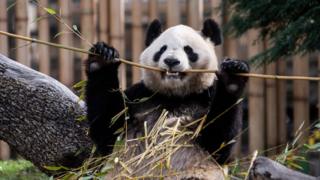 Did you know giant pandas have a false thumb on each paw? Now scientist believe it provides a key secret about the animal's evolution.

Unlike humans who have five digits, the giant panda paw has six digits, including a thumb located on their wrist - which helps the veggie-loving bear to eat bamboo, which is a big part of their diet.

"It uses the false thumb as a very crude opposable thumb to grasp bamboos, sort of like our own thumbs except it is located at the wrist and is much shorter than human thumbs."

Passionate about pandas? Try these:

Quiz: How much do you know about pandas?

Giant Panda experts and enthusiasts have known about the false thumb for quite a while, but a lack of fossil evidence has left researchers puzzled as to how or why it evolved in the way that it has. 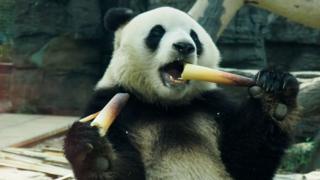 Now, new fossils of an ancient panda called Ailurarctos found near the city of Zhaotong in the northern Yunnan province of China show that, not only did the animal have a false thumb, but it was once longer than those seen in pandas today.

The fossils, which are six to seven million years old, are believed to be the oldest known evidence of the animal's paw with a sixth digit. 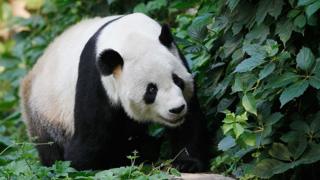 Researchers believe that the thumbs became shorter rather than longer because of modern Pandas needing to walk on their paws. The thumb also became stronger with a hook on the end because of the animals having to hold bamboo.

"Think of the false thumb as being stepped on every time the panda walks. And therefore, we think that is the reason that the false thumb in modern pandas has become shorter, not longer," Wang said.

The experts also think the thumb shows how the giant panda's diet has changed to become 99 percent vegetarian.

Although the pandas occasionally eat small animals, they eat for up to 14 hours a day and most of that is eating nearly half their body weight in bamboo which they hold using their thumb.

Giant pandas no longer listed as endangered - but still vulnerable