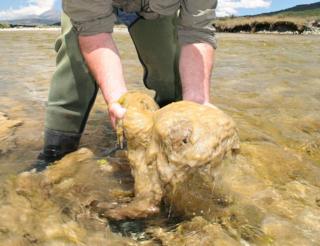 Rivers in the US state of Michigan have been affected by a rather unusual type of algae.

Commonly referred to as 'rock snot', the algae has been spotted in the state's Manistee River and it's led scientists and environmental authorities to look into how much of a problem it could be.

So why is the rock snot such a concern? It's because the algae, which is formally known as didymo, can form thick white or brown mats on hard surfaces, including the bottom of streams and rivers.

Didymo is actually microscopic algae which means it can't be seen with just the human eye, but this tiny organism is able to produce stalks which form the thick layers found in certain bodies of water.

It was first seen in Michigan back in 2015 in the state's St. Marys River. 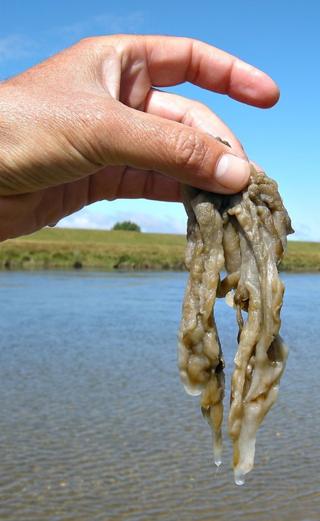 Mark Hoddle
Rock snot, which is formally known as didymo, has a texture similar to wet wool

Unlike other types of algae, didymo thrives in low-nutrient cold water rivers and streams.

"They grow in really cold water, and they tend to bloom or produce these stalks under really low-nutrient conditions," Ashley Moerke who is a freshwater ecologist and professor told local Michigan News, MLive.

"So, it's actually the opposite of what we see with the blue-green algae, those harmful algal blooms; it's the low nutrients that seem to be driving some of these blooms instead."

The thick layers of rock snot found in rivers like ones in Michigan can pose a danger to many of the organisms which live at the bottom of streams and rivers. This can also have an impact on fish like trout as their food sources may be affected.

Despite its name, 'rock snot' isn't typically slimy. The thick mats the algae forms tend to be similar to wet wool in texture. 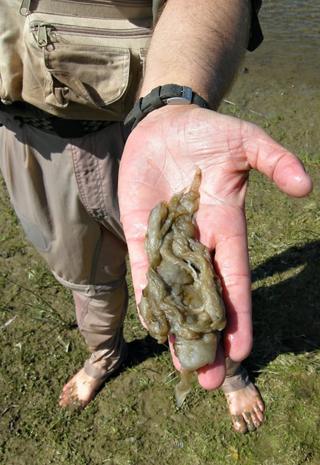 Didymo can also be bad news for people too. It can be pose problems for people trying to fish and can actually be spread by human activities including kayaking and canoeing. The algae can unknowingly stick to boats, clothes and fishing hooks and lines, and remain there for weeks.

People who fish or boat in areas which are known to have rock snot have been told to clean all their equipment, drain the water fully, and dry their fishing gear and boats between uses to reduce the chances of the rock snot spreading.

There isn't a way to completely remove rock snot from the environment at the moment, but researchers are looking to find out more about it including its life cycle, how it spreads and the impact it has on cold-water ecosystems.