Care system: Children and charities call for children in care to be heard

Charities and campaigners for children's rights are calling on the government to give young people more support and listen to their stories about being in care.

Action for Children, Barnardo's, Become, Coram Voice, National Children's Bureau, NSPCC and The Children's Society have joined together with care experienced young people to demand change to the care system.

According to the latest government figures there are more than 80,000 children living in care in England alone.

More than 100 young people with care experience gathered at parliament last week to demand that their voices are heard and for the children's social care to be radically reformed.

Some of them spoke to Newsround about why having their voice heard is so important.

What does being 'in care' mean?

If a child can't be looked after by their birth parents the local council takes parental responsibility for that child.

Callum is 14 and has been in care since he was five years old. 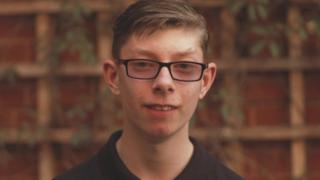 Callum has been in care since he was five years old

He says when he was younger, children his age didn't really understand what being in care meant.

"I want to show children and young people why children might be given different homes. I have more opportunity now to use my voice," he said.

What is adoption, fostering and the care system? 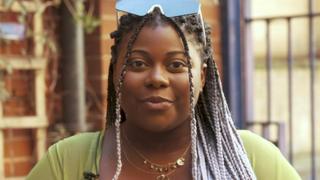 Rachel went into care when she was nine years old and initially shared a foster home with her younger siblings. When she was 10, she was separated from them and contact was limited.

"I feel that it's important for everyone to hear from a young person," she told Newsround. 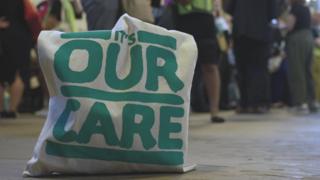 "I feel like everyone hears about foster care from second-hand information, but if you hear the real stories you realise that everything people are doing has an impact on us," she added.

A care placement can include a residential care home or foster care when a child goes to live with another family.

Stability is really important for care experienced children, but new research has found that every week more than a thousand children in care are moved on from their placements.

Studies of Government data by Action for Children, Barnardo's, Become, Coram Voice, National Children's Bureau, NSPCC and The Children's Society say that over the last four years, children's care placements have changed nearly a quarter of a million times.

A review of England's council-run children's services, called the Independent Care Review, was published in May.

It highlighted the importance of having a consistent adult who children in care can trust and having high-quality placements that meet children's needs.

A Department for Education spokesperson said: "Keeping vulnerable children safe is at the heart of government policy."

They say since the review they have committed to a "major reset" of the system which will be overseen by experts and people with experience of the care system.

The charities, campaigners and young people now hope that action will be taken to transform the care system.

Are you seeing more wasps around?