Scottish independence: Nicola Sturgeon calls for a referendum to take place next year

Nicola Sturgeon has outlined her plan for a second referendum to be held on Scottish independence.

A referendum is when adult voters are asked to vote on one particular question.

Scotland's First Minister has said she hopes to hold the referendum on 19 October 2023 asking the question: 'Should Scotland be an independent country?'

Ms Sturgeon said she would be writing to Prime Minister Boris Johnson to ask for formal consent for the vote to be held.

But the path to holding the referendum is complicated, read on to find out why it's a big deal and what could happen next...

What is Scottish independence and why is it a big issue?

Nicola Sturgeon: Scotland wants 'a choice over our future'

What does Nicola Sturgeon want? 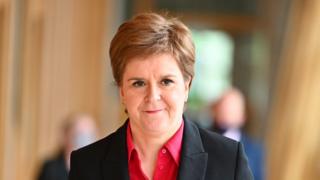 Ms Sturgeon announced today her plan to ask Scottish people if they want to be an independent country from the rest of the UK.

Addressing Scottish Parliament, she said: "Independence will give us the opportunity to chart our own course, to build a wealthier, greener, fairer nation, to be outward-looking and be internationalist, to lift our eyes and learn from the best."

Scotland has been part of the UK for more than 300 years.

In Scotland, Members of the Scottish Parliament (known as MSPs) have control over certain things - like hospitals and education within Scotland.

But some powers remain with the UK government based in Westminster, including holding a referendum over independence.

Ms Sturgeon will write to Prime Minister Boris Johnson asking for permission to have a second vote on the country's future.

Although the UK government is unlikely to grant permission for a second referendum, Ms Sturgeon says she will find a legal way to continue.

She says she will ask the UK Supreme Court to decide whether the Scottish Government can hold a vote without the approval of the UK government. 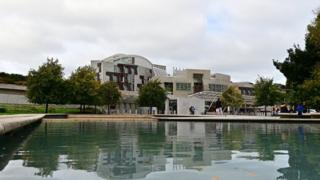 Getty Images
The Scottish Parliament, known to many as Holyrood

Scottish independence is a very big issue in Scotland.

At the centre of the issue is the fact that Scotland is a country, but so is the United Kingdom, which Scotland is a big part of.

Scottish people are both Scottish and British - just as people in England, Wales and Northern Ireland could describe themselves as being from two places.

It can be confusing, and for people in Scotland how Scottish they feel versus how British they feel is different for each person.

Some people in Scotland think Scotland should be completely in charge of itself.

This is called independence. In 2014, people in Scotland were asked if they wanted to make this change in the first referendum to be held on the issue.

Back then the 'No' side won with 55% of the vote, and Scotland remained part of the UK.

Ms Sturgeon says she wants to find an official way for the people of Scotland to express their view on independence: "Whether yes, no or not yet decided".

The 2014 referendum was able to take place because the UK government gave the Scottish Parliament permission to hold the vote.

Since then, two UK Prime Ministers - Theresa May and Boris Johnson - have said no to allowing another vote on independence.

The UK government and supporters of Scotland staying in the UK argue that the decision made by the people of Scotland in 2014 should stay in place.

They also argue that votes of such importance should not be held often, and that such decisions should only take place "once in a generation".

But the SNP - Nicola Sturgeon's party - and some other supporters of independence disagree.

They argue that the Brexit vote which saw the UK leave the European Union changed things in Scotland dramatically. Although the majority of people living in the UK voted to leave the EU, in Scotland a big majority voted to remain.

Scotland and the UK

The SNP also argue that political parties who support independence won a majority in elections to the Scottish Parliament last year, and so their wish to hold another referendum should be carried out.

Without the agreement of the UK government, Nicola Sturgeon says she will find another way to hold a referendum that is legal.

She says the Supreme Court, which is the highest court in the UK, has been approached to find out whether the Scottish Parliament has the power to hold a second referendum.

The first minister said: "My determination is to secure a process that allows the people of Scotland, whether yes, no or yet to be decided, to express their views in a legal, constitutional referendum so the majority view can be established fairly and democratically.

"The steps I am setting out today seek to achieve that."

What has the UK government said? 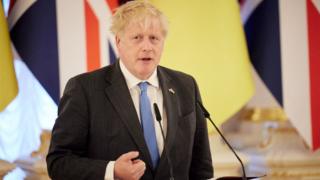 The UK government has stated "now is not the time" for another referendum.

Prime Minister Boris Johnson said: "We'll study it very carefully and respond properly. I think the focus of the country should be building a stronger economy. That's what we're doing. I certainly think that we'll have a stronger economy and a stronger country together."

Scottish Greens to enter government for the first time

Scottish second referendum: Why are we talking about this?