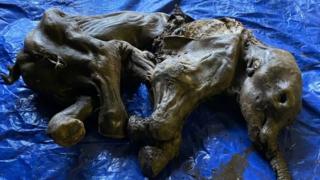 A whole baby woolly mammoth has been found frozen in north-western Canada.

The mammoth is thought to be more than 30,000 years old, meaning it was alive during the ice age.

It was found by gold miners in the Yukon Klondike region of Canada on Tuesday. The area of the find belongs to Native Americans known as Tr'ondek Hwech'in First Nation.

The baby, thought to be female, has been named Nun cho ga, meaning "big baby animal" in the Han language spoken by the Native Americans who live there.

The mammoth's body was found mummified - preserved by the cold permafrost surrounding it. Permafrost is a layer, below the ground, of dirt and ice that is permanently frozen.

It's thought that Nun cho ga was unearthed by a miner bulldozing soil nearby.

"Nun cho ga is beautiful and one of the most incredible mummified ice age animals ever discovered in the world," said Yukon palaeontologist Grant Zazula. 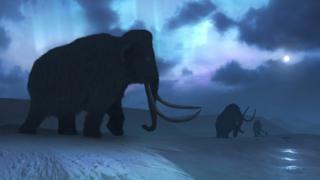 The mammoth is being compared to another discovery made in 2007 in Siberia, Russia.

Nun cho ga is also the best-preserved woolly mammoth discovered in North America. The partial remains of a mammoth calf, named Effie, were also found several years ago in 1948 at a gold mine in the neighbouring US state of Alaska.

Woolly mammoths: Plans to bring them back from extinction in Russia