Robot fish at Sichuan University eat up microplastics in water 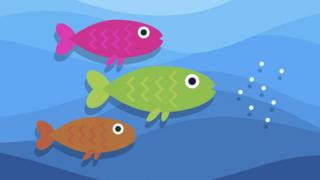 Scientists in China have invented tiny robot fish that gobble up rubbish in the water!

But despite their small size, they're fast! They can travel up to 10 centimetres in under 4 seconds.

Their job is to absorb miniscule bits of plastic that float in water - known as microplastics,

Microplastics are a big problem for animal and plant life across the world.

Water-based organisms may absorb or eat microplastics which can cause them serious harm.

It's got so bad that microplastics have been found in the very deepest parts of our oceans and even on the top of mountains!

Which is why many scientists are looking for a solution to the problem. 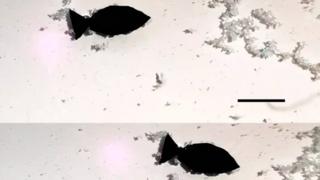 Researchers at Sichuan University in China have successfully developed these tiny robots to "eat" microplastics they come across in the water.

They propel themselves, seeking out floating plastic by bonding with dyes, antibiotics and heavy metals in the plastic.

The robots are made of a very strong material called nacre which can be found on the inside of clams!

And the fish are also "self-healing"; repairing themselves if they've been damaged.

Yuyan Wang is a lead author of the study. She believes these tiny fish are the "first example of such soft robots"!

But she says more work is needed to see how well the fish will cope in real-world scenarios.

What do you think of these robot fish? What would you call your robot fish if you owned one? Let us know in the comments!

Microplastics: Billions of tiny pieces of plastic are covering the seabed