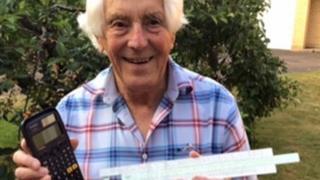 A 92-year-old grandpa man who last sat a maths exam the year after World War Two ended has just sat his GCSE in the subject!

Derek Skipper, from Orwell in Cambridgeshire, sat the exam at Comberton Village College after taking an online learning course.

He said his grandchildren thought he "was nuts" for becoming a student once again.

However, he said it "was a bit of fun" and better than watching television.

The Cam Academy Trust said Mr Skipper was the "oldest person to sit a GCSE".

Age is just a number - meet the world's oldest wing-walker 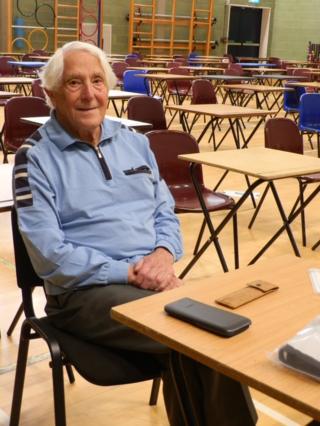 @CamAcademyTrust/Twitter
The last time Mr Skipper sat a maths exam was in 1946. This time around, Mr Skipper, brought in a calculator and a magnifying glass to help him see the questions better.

Mr Skipper said: "There's so little on television these days. This was much more interesting, some people do crosswords and this is my equivalent."

After watching a young friend struggle with the subject he decided to look into courses and said he was "mildly interested" in maths before the course.

"There were a lot of things I'd never heard of or weren't known when I was at school, like Venn diagrams... I never had those," he said.

My family thought I was nuts for trying it but [were] also very supportive and helped me out.

"I started looking at YouTube for maths and saw how many things I didn't know," he said. Mr Skipper did his classes over Zoom and met many of his classmates on the day of his first exam.

Of the exam he said the first few questions were nice and easy but "things got a bit stickier by the end".

He also said he ran out of time but still hopes he has managed to pass.