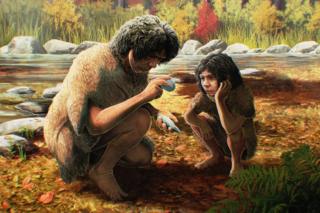 Kent was home to Britain's earliest humans, research has found.

New discoveries confirm that Homo heidelbergensis, an ancestor of Neanderthals, lived in an area near to what is now Canterbury in Kent, between 560,000 and 620,000 years ago.

Archaeologists first found artefacts at the site back in the 1920s but using modern techniques they have finally been able to determine the age of the discoveries.

Did a Neanderthal cave artist paint this? 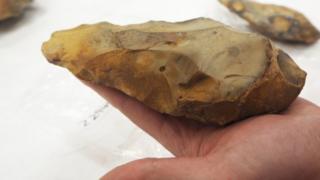 Museum of Archaeology and Anthropology, Cambridge/
A hand axe was one of the artefacts discovered in Kent

Stone tool artefacts were first found at the site in Fordwich in 1920 by local builders, which are now in the British Museum.

Located in an ancient riverbed, researchers now say the site is one of the earliest known Palaeolithic sites in northern Europe.

Early humans are thought to have come to Britain from as early as 840,000 and potentially 950,000 years ago, but the study suggests early visits were only brief.

Dr Tobias Lauer from the University of Tubingen in Germany, part of the research team said: "This is one of the wonderful things about this site in Kent.

"The artefacts are precisely where the ancient river placed them, meaning we can say with confidence that they were made before the river moved to a different area of the valley."

The team also found new artefacts including tools. Dr Alastair Key from the University of Cambridge, who directed the excavation, said: "The diversity of tools is fantastic.

"In the 1920s, the site produced some of the earliest hand axes ever discovered in Britain.

"Now, for the first time, we have found rare evidence of scraping and piercing implements at this very early age". 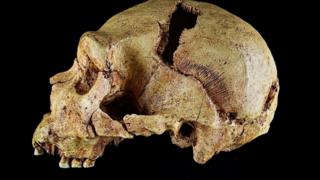 Giuseppe Castelli Department of Archaeology, Unive
A fossil skull of homo heidelbergenis, the earliest humans found to live in Britain

Homo heidelbergensis was a hunter gather who was known for eating lots of diverse animal and plant foods.

This means the tools found would have been used when hunting.

"The range of stone tools, not only from the original finds, but also from our new smaller excavations, suggest that hominins living in what was to become Britain, were thriving and not just surviving," said Dr Tomos Proffitt from the Max Planck Institute of Evolutionary Anthropology who studied the artefacts.

Were dinosaurs warm-blooded? Tyrannosaur bones discovered in the Arctic

New species of human may have been discovered