Mount Everest: Nepal to move base camp from melting glacier 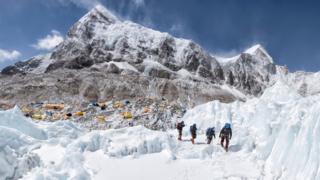 Nepal is preparing to move its base camp for Mount Everest because global warming and human activity are making it unsafe.

The camp, used by up to 1,500 people in the spring season to climb the world's tallest mountain, is located on the fast-melting Khumbu glacier.

A new site is to be found at a lower height, where there is no year-round ice, an official told the BBC.

Researchers say melt-water is not good for the glacier, and climbers say cracks are increasingly appearing at base camp while they sleep.

What is climate change and why is everyone talking about it?

The camp currently sits at a height of 5,364 metres above sea level.

The new one will be 200m to 400m lower, Taranath Adhikari, director general of Nepal's tourism department, told the BBC.

The plans follow the recommendations of a committee formed by Nepal's government to help and keep an eye on mountaineering in the Everest region.

What's happening to the Khumbu glacier? The Khumbu glacier, like many other glaciers in the Himalaya mountain range - where Mount Everest is found - is rapidly melting and thinning due to global warming, scientists have found.

A study by researchers from Leeds University in 2018 showed that the segment close to base camp was thinning at a rate of 1 metre per year.

Mountaineers and the Nepali authorities say a stream right in the middle of the base camp has been expanding year by year.

They also say crevasses and cracks on the surface of the glacier are appearing more frequently than before.

In the morning, many of us have this chilling experience that we could have fallen into them in the night. Cracks on the ground develop so often, it is quite risky. 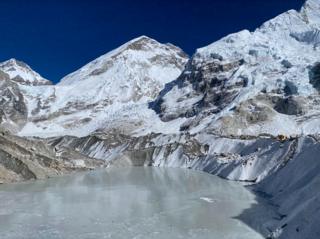 World Vlog Challenge
Shree Gurung, a trekker, says this lake appeared next to base camp between 2020 and 2021

The main negative about having a base camp lower down the mountain is it would add to the length of the climb from base camp to camp one, the next staging post for those climbing the mountain.

Most climbers still climb Everest from the Nepalese side, but the numbers starting in China are increasing.

Tshering Tenzing Sherpa of the Sagarmatha Pollution Control Committee (SPCC) said that despite the problems, the present base camp site could continue to serve its purpose for another three to four years.

But Nepali officials say the move may happen by 2024.

Mount Everest: Climbers having to wait their turn to reach summit

What does a Sherpa at Mount Everest do?