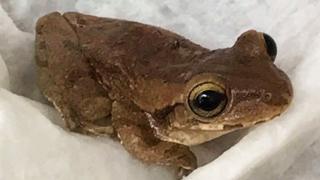 A small tree frog has been discovered in a bag of bananas more than 4,000 miles from its home.

The tiny creature had travelled from the Dominican Republic, in the Caribbean, to London in the UK inside a bunch of bananas.

The little frog, which is only around 3cm long, was discovered by a shopper who was unpacking his fruit in South London.

A worker from the RSPCA - which is an animal welfare charity, was called to collect the frog when it was found.

Starlings in a post box and other animals in funny places!

The St Bernard dog that got stuck and other rescued creatures

This baby goat, emu chick and gosling are besties

When the frog was discovered, it had an injured leg, but it was taken to Heathrow Animal Reception Centre to be looked after.

Philip Norman from the RSPCA said, "It can be difficult to identify species of frog, but it's believed to be a Hispaniolan common tree frog or a Dominican tree frog.

"The shopper had quite the shock when he unwrapped [the bananas] at home to find the little frog inside. This little one has had quite the adventure."

The bunch of bananas that the shopper bought were picked on the island, so the frog must have been hiding inside so got an unexpected trip to the UK.