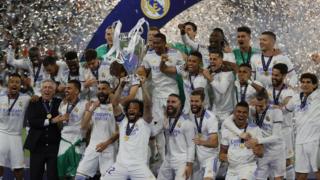 Vinícius Júnior scored the winning goal in the 59th minute of the Champions League tournament final.

Real extended their record for the most European Cup wins by any club to 14 victories.

However, the final had problems before kick off with delays and Liverpool fans having trouble getting into the stadium.

How did the Champions League final play out? 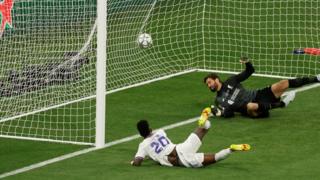 Liverpool couldn't get past Real goalkeeper Thibaut Courtois at the Stade de France in Paris.

He produced one of the great individual performances to stop Liverpool scoring time and again - and was named Man of the Match.

Real's winning moment came after 59 minutes when Vinicius Junior ran in at the far post to score.

I am really proud of the team. We stuck to it and when I needed to be there I was there for the team. We beat some of the best clubs of the world. City and Liverpool were unbelievable this season. They fought to the end in the Premier League, Liverpool won two cups and they were really strong. We played a great game today. We had one chance and scored it.

Although they didn't win, Liverpool boss, Jurgen Klopp, had some encouraging words for fans.

"Where's [the final] next season? Istanbul? Book the hotel."

Even though they missed out on winning the Premier League and Champions League in the last week, Liverpool's magnificent season brought them the Carabao Cup and the FA Cup trophies.

What went wrong before the match? 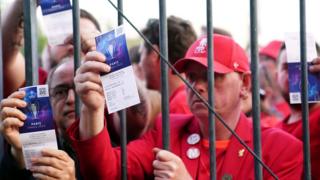 PA Media
Some Liverpool fans couldn't get into watch the game

This was also a final spoiled by chaotic scenes outside the stadium before the game started.

Uefa - the organisation that runs the Champions League tournament - said thousands of Liverpool supporters tried to get into the stadium with fake tickets.

They say they used such measures to stop some supporters climbing over the barriers to get into the stadium. 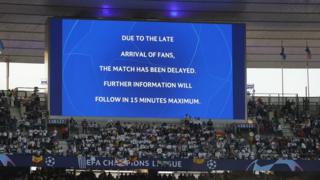 The issues outside the stadium delayed the start of the final by 30 minutes.

But Liverpool Football Club have called for a formal investigation into the security arrangements.

A spokesperson for the club said they were "hugely disappointed" at how their supporters had been treated.

"This is the greatest match in European football and supporters should not have to experience the scenes we have witnessed tonight", they said in a statement.