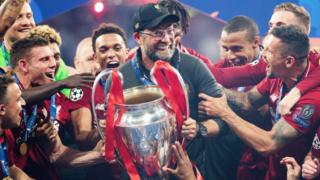 Getty Images
Will Jurgen Klopp's Liverpool lift the Champions League trophy like they did in 2019?

The Premier League season may be over... but there's still plenty of sporting action coming up this weekend!

Liverpool, who just missed out on the title to Manchester City, could still get their hands on more silverware this season as they face Real Madrid in the Champions League final in Paris on Saturday night.

But, that's not the only big sporting event happening - there's more important football, as well as rugby union, rugby league, tennis, Formula One and BMX all taking place too!

Here's our guide to what sport you can look forward to watching over the next few days.

What sporting event are you most excited about this weekend? Who's your favourite sports star? Let us know in the comments below...

Liverpool have won six European Cups in their history, more than any other English team!

They last won the cup in 2019, but can they secure a seventh European trophy to add to their impressive collection with a win on Saturday in the French capital?

Real Madrid will be tough opponents - the two teams faced each other in the 2018 Champions League final, where it was the Spanish side who came up tops, beating the Reds 3-1. 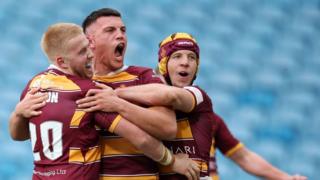 Getty Images
Huddersfield Giants last lifted the trophy all the way back in 1953 - will they be celebrating this weekend?

It's rugby league's equivalent of the FA Cup, and this Saturday will see thousands of excited fans making their way to Tottenham Hotspur's stadium in north London for the Challenge Cup final.

Huddersfield Giants are taking on Wigan Warriors for the most prestigious trophy in the game, with many predicting that this year's final could be one of the tightest contests the occasion has seen.

Wigan are going in as slight favourites, and the pressure will be on head coach Matt Peet in his first season in the job, to end their nine-year wait to win the cup. 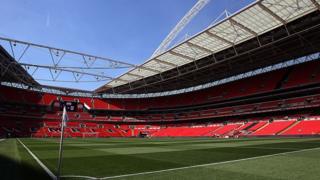 Fulham won the Championship title this year and secured automatic promotion to the Premier League next season, along with Bournemouth who finished second in the table.

However, the third club that will be joining them still needs to be decided!

It will be between Huddersfield Town and Nottingham Forest, who will battle it out at Wembley Stadium in the Championship play-off final on Sunday 29 May for the final promotion spot. 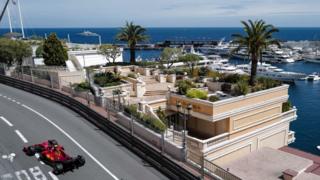 It's one of Formula One's most iconic races of the season, taking place in the glamorous surroundings of the French Riviera on the Mediterranean Sea.

Dutchman Max Verstappen, the current world champion, is top of the driver's standings with four wins under his belt.

Britain's Lewis Hamilton hasn't won a race yet this season, but is no stranger to this Grand Prix having won it three times previously.

But they'll be facing stiff competition in the form of Ferrari driver Charles Leclerc. The Frenchman is from Monaco, knows these streets well and will want to pick up a win in his home Grand Prix, after narrowly missing out last season.

Rugby union's Champions Cup final takes place on Saturday, with Leinster and French side La Rochelle going head-to-head in Marseille in France. The Irish side will be hoping to secure a record-equalling fifth European title.

Elsewhere in France the French Open tennis tournament is heading into it's second week in Paris.

Emma Raducanu may have been knocked out of this year's tournament but there's still other British hopes left in the men's singles as well men's, women's and mixed doubles events that are all underway.

The 2022 BMX Racing World Cup gets under way this weekend with two rounds taking place in Glasgow in Scotland.

BMX got a lot of attention at last summer's Olympic games after Team GB's Beth Shriever and Kye Whyte brought home gold and silver respectively, and they'll no doubt be wanting to continue their fine form.

What sport will you be watching this weekend? Let us know in the comments!