'Partygate': What do YOU want to know? 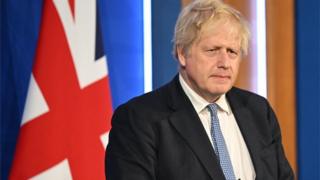 The Prime Minister has said he won't resign over what's become known as 'Partygate'.

That was a series of news stories and investigations into gatherings that took place during lockdown in 10 Downing Street - where the Prime Minister lives and works.

Lots of people were very angry about it because it meant that some of the people running the country were breaking the rules they asked everyone else to follow.

It lead to a big investigation, police fines and lots of senior officials losing their jobs.

Now an important report has been published which had many criticisms about the events and of the people in charge.

Mr Johnson has apologised again for his part in events and said that he takes responsibility for what happened under his leadership - but others think he should lose his job.

Now it's your chance to ask any questions you have about what happened, what it means and what happens next.

Leave your question in the comments below and we'll send some of them to the BBC's top expert - Political Editor Chris Mason - and try to get some answers.