The long-awaited full report into the lockdown parties that happened in Number 10 Downing Street and other government spaces during the pandemic has been released.

The report, written by senior civil servant Sue Gray, concluded that many of the events "should not have been allowed to happen" and that senior leadership "must bear responsibility".

Boris Johnson responded saying he takes "full responsibility for everything that took place" but said that he wasn't going to leave his job as Prime Minister.

For most of 2020, the UK was in different stages of coronavirus lockdown. People have criticised Boris Johnson and asked him to resign because the rules at the time that the parties happened were that people weren't able to meet up or spend time with people they didn't live with.

He had also been accused by other politicians of lying to Parliament about the lockdown parties, but he again denied that he had lied when he previously said that no Covid rules had been broken.

More about this story

Sue Gray party report: What do all the words mean? 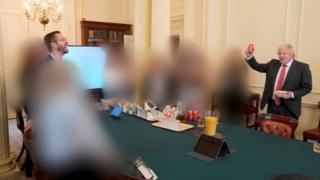 Reuters
The report contains new photos from lockdown parties, such as this one showing the Prime Minister at his Downing Street birthday party on June 19 2020

The 48 page document was received by No. 10 this morning and contains photographs and gives details of 16 events that took place between May 2020 and April 2021.

In it, Ms Gray said that many of the events "should not have been allowed to happen".

She explained that events she investigated were "attended by leaders in Government" and added that "what took place at many of these gatherings and the way in which they developed was not in line with Covid guidance at the time".

She also added that senior leadership at Downing St must take "responsibility for this culture".

She concluded that there is "significant learning to be drawn from these events" but that it is "for others to consider" whether any further action is taken.

The Metropolitan Police announced it had concluded its investigation on 19 May.

What has the Prime Minister said? 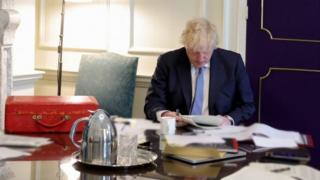 The Prime Minister thanked Sue Gray for her report and said he was "humbled" by the experience and that government had "learned their lesson".

He told Parliament that he "briefly attended" some of the lockdown gatherings but said that he did not know at the time that they had gone on for "far longer than necessary" as he wasn't there.

He added that he took "full responsibility for everything that took place" on his watch.

He also said that he was "surprised and disappointed" by some of the revelations in the report.

Boris Johnson apologised for his actions and for the law-breaking that went on in Downing Street, but he denied that he had lied to Parliament when he previously said that no Covid rules had been broken.

He said that significant changes had already been made and that he was confident of the new structures in place.

What have other politicians said? 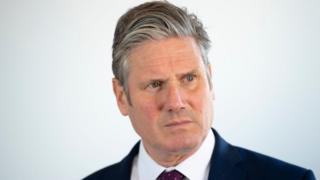 Sir Keir Starmer, the leader of the Labour Party - the main opposition party - said that it was now "impossible to defend the Prime Minister's words" and that the report demonstrated the "arrogance" of the government.

Mr Starmer said it was time for Mr Johnson "to pack his bags" and "restore dignity" to the office of the Prime Minister.

Sir Keir is currently under investigation by Durham Police because of a gathering he attended, along with Labour's deputy leader Angela Rayner in the city, in April 2021.

Sir Keir has said that he will quit as Labour leader if he is given a fine by Police over claims he broke lockdown rules.

What happens to the Prime Minister now? 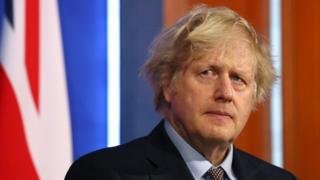 Boris Johnson has said that he won't resign - or step down - from his role as Prime Minister. He says he wants to get on with the job of tackling the things that matter to the British people.

However, if enough number of Conservative politicians write to a special committee, called the 1922 Committee, they can request a leadership challenge meaning he could still lose his job.

A minimum of 54 Conservative MPs must send letters to the committee in order to trigger what is also known as a vote of no confidence. The letters are held in secret, so it is not known how many have been written. All we know is that there are fewer than 54.

Conservative politicians would then vote for or against Boris Johnson and if more than half vote against him, then the Prime Minister would lose his position and the party would elect a new leader.

Some Conservative politicians have called for Boris Johnson to go, but others have said they will stand by him.

Gatherings held at Downing Street, or other government buildings, during the pandemic recently led to a Metropolitan (Met) Police investigation into 12 events.

The Met Police issued a total of 126 fines to 83 people, for events happening across eight different dates.

Boris Johnson, his wife Carrie, and Chancellor Rishi Sunak all received a fine each for attending a birthday party for the Prime Minister in June 2020.

But Mr Johnson has been told he faces no further fines after the police closed their investigation into Downing Street parties.

Who is Sue Gray? 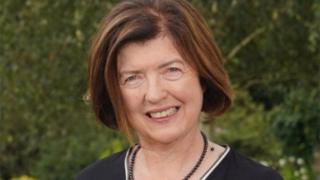 Ms Gray is currently second permanent secretary at the Cabinet Office and is a senior civil servant.

Ms Gray had been asked to look at the nature of and reasons for all the lockdown gatherings, including who went to them, and whether they broke Covid rules.

Ms Gray delivered an initial report at the end of January, but delayed the publication of the full report until the Met Police concluded its investigation into some of the events in question.

Sir Keir Starmer: Labour leader says he will quit if given fine by police

Boris Johnson and lockdown parties: The story so far

106 comments
Back to top
unknown