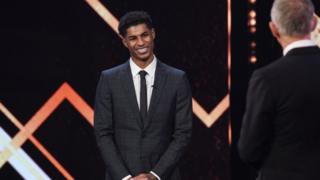 Marcus Rashford's book, You Are A Champion has won Book of The Year.

He was awarded the title at The British Book Awards which has been nicknamed, "The Nibbies".

The book was written by Rashford and a journalist called Carl Anka, with the hopes it would encourage children to succeed.

Rashford said: "Every child should pick up the book and believe that I wrote it for them".

Would you like to join Marcus Rashford's book club?

In a pre-recorded message he said: "The reason I made the book and the purpose of the book was to give kids the opportunity that I never had but as I got older it is something that is really important.

"I think the way that the book has been perceived and the reception it has got and the actual words that I have heard from a lot of the kids - they have taken different stuff from the book, which is what I intended to do.

"I am really happy with it and hopefully it shows that if we can get books in the hands of children, it allows them to dream and believe in whatever they want to achieve in life."

The judges had high praise for Marcus' book.

"Marcus Rashford wanted a book to inspire a generation of kids who are often hard to reach and for whom books might not have been a big part of their childhood. He and his publisher have succeeded spectacularly. The campaign to get his book into the right young hands was focused and brilliant, and sales of over 200,000 copies are testament to this. The messaging of You Are A Champion is wholesome and positive and another brilliant example of the legacy that Marcus is sure to leave behind when his playing days are long gone."

The judges said he won for his "empowering impact on the book world, working tirelessly to represent black communities while demystifying the industry for aspiring illustrators."

Look Up: Award-winning authors want kids to be 'inspired by everything!'