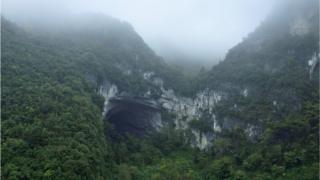 Scientists have found an entire forest hidden at the bottom of a giant sinkhole in China!

The discovery was made earlier this month in the south of the country by explorers who found three cave entrances.

Experts say the sinkhole contains lots of ancient trees and plants, some of which are 40 metres tall.

They also believe that it could include some new plant and animal species that have never been seen before.

How elephant poo is helping conservationists

What did scientists find? 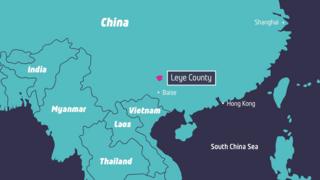 Cave explorers alerted scientists after coming across the sinkhole in China's Guangxi region.

The massive sinkhole is 306 metres long and nearly 200 metres deep!

Scientists hiked for hours to reach the base of the sinkhole to see what it contained.

A sinkhole is a hole in the ground which is formed when the land collapses away leaving a big hole on the surface.

It happens when the rock underneath the ground is dissolved by water. Sinkholes can cause a lot of damage to the surrounding land.

They found that the site had three caves in its walls and a well-preserved primitive forest at the bottom.

Chen Lixin, who led the expedition team, told the state news agency Xinhua that as well as the tall trees there was dense undergrowth on the floor that came up to his shoulders.

Experts also believe that the forest in the sinkhole could lead to the discovery of new plant and animal species.

Chen added: "I wouldn't be surprised to know that there are species found in these caves that have never been reported or described by science until now."

A huge sinkhole has appeared in Mexico

Is this one of the deepest sinkholes ever?