Pokémon: New Ditto transformation cards - would you peel them? 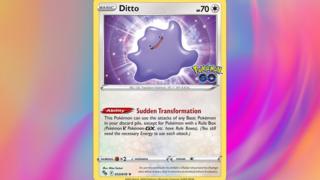 To peel or not to peel? That is the question! Pokémon has revealed a new expansion to their card game which includes peelable transformation cards.

The company shared the news in a post online, where they revealed that some of the cards will have a mysterious Ditto logo in the bottom left corner.

This logo means that the top layer of the card can be peeled off like a sticker to reveal a secret Ditto underneath.

Ditto is a pokémon known for it's ability to transform into objects and other pokémon.

The special Pokémon GO-inspired cards will be released on 1 July.

Speaking about the new cards the Pokémon company said: "To find Ditto in the Pokémon GO expansion, look for other Pokémon that have a layer you can peel off to reveal the Transform Pokémon underneath!

"Note that the Pokémon that rests on top of Ditto can't be used competitively in official matches—only the Ditto itself." they said.

Other than Bidoof - which was used as an example card in the announcement - it is not yet known which other pokémon will have a hidden Ditto underneath them.

Why are people conflicted about the new cards? 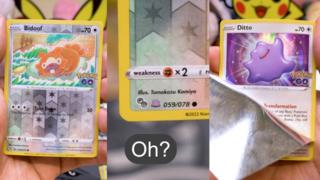 Pokémon card collecting has became serious business, with some people selling ultra-rare cards for hundreds of thousands of pounds!

Often, pokémon card collectors will keep their special cards in protective cases to help keep them in as good a condition as possible.

However, some collectors have raised the question, to peel or not to peel, the new transformation cards?!

The most expensive single Pokémon card to sell at auction was a first edition holographic shadowless Charizard card which sold for a whopping $369,000 (around £262,000) in 2020.

Some collectors think that the cards should be left unpeeled to keep them in the best condition, and increase their rarity if other people do peel them.

However some people have questioned if the sticker glue might damage the card over time if it is left unpeeled.

What do you think? Would you peel the cards? Or leave them be? And why?

Pokémon at 25: A history - from Pocket Monsters, to TCG and Pokémon GO