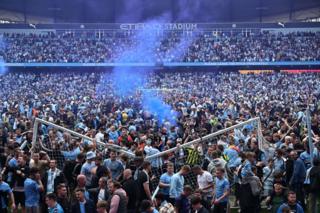 Manchester City's Premier League title win over Aston Villa was a time of great excitement for fans, with many running onto the pitch to celebrate as soon as the whistle was blown.

But although it might not seem like a big problem, pitch invasions like this are starting to become a major cause for concern for players, clubs and the people who run football.

The reason is that pitch invasions aren't allowed and they can lead to really unsafe situations for everyone present.

In this case there were violent scenes and even the goalposts were broken.

Two men have been charged over crowd disorder following the games and police are also investigating after Aston Villa keeper Robin Olsen said he was assaulted. 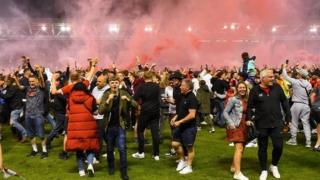 The pitch invasion at the Etihad wasn't the only one in recent weeks.

Another pitch invasion took place following the Premier League match between Everton and Crystal Palace last week, when Palace boss Patrick Vieira ended up in an argument with a fan.

In League Two, several Swindon Town players have said they were "physically and verbally abused" when fans entered the pitch, while in the Championship another fan was jailed after running on to the pitch and hurting Sheffield United captain Billy Sharp after his team's match against Nottingham Forest.

These shocking incidents have led to many people talking about the issue and asking what the best way is to deal with it going forward. 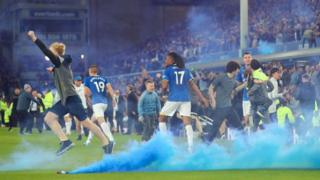 While most fans are simply celebrating and don't want to hurt anyone, some clubs and players have said the situation is "getting concerning" and have raised serious worries about safety.

Klopp said he thinks celebrations can take place without pitch invasions, adding: "I understand emotions but for the other team it's dangerous.

"We can celebrate things without threatening ourselves and the opponent." 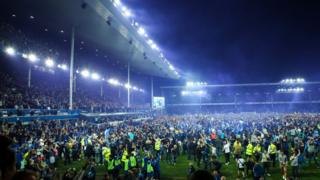 However, Everton boss Frank Lampard said he doesn't see pitch invasions as a big issue as long as fans behave, saying: "If it is done in the right way let them stay on the pitch, let them have their moment."

He has said the rise in the number of pitch invasions was "alarming", and called on fans to "celebrate in the correct way".

He reminded fans that "the pitch is the players' place of work and like everyone else, they should be able to feel safe".

What do the rules say? 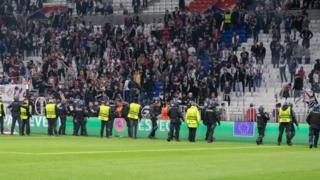 According to the Football Offences Act 1991, it is an offence for fans to enter the pitch "without lawful authority or lawful excuse".

The FA has said the situation cannot continue and that it is "very concerned about the rise in anti-social behaviour from fans".

In a statement on Friday 20 May, the FA said that "Football stadiums should always be a safe and enjoyable space for everyone, and these incidents are completely unacceptable and have no place in our game."

They added that these actions were putting "players, fans and people who run the game at great risk". 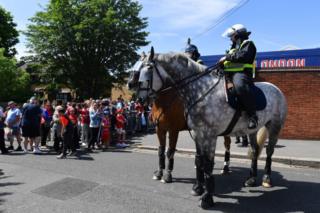 The Premier League also issued a statement saying it is "concerned about fan behaviour at grounds", but that it also "recognises that reckless actions are carried out by a small minority of fans and the majority of supporters attend and watch matches in a safe and respectful way".

The Premier League said it had encouraged clubs to remind supporters that it is illegal for them to enter the pitch at any time and that doing it "may result in a criminal record and stadium bans."

What could happen if match invasions continue?

One suggestion is saying to teams that if their fans come onto the pitch, then the clubs could have points taken away.

This would put the responsibility and the punishment onto the clubs themselves so the club's fans might not want to damage their club's results.

However, the Professional Footballers' Association (PFA) has also called for a review into matchday security and fan disorder. 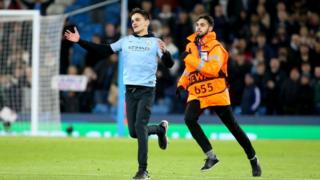 The main way that fans are managed in football stadiums is by stewards who wear high-vis tabards or jackets.

Their job is to keep things safe and organised without getting the police involved.

While on many occasions, stewards can quickly stop one person who strays onto the field, it can be very difficult to stop thousands of fans pouring onto the field at once.

So it's been suggested by some that more police at grounds could help reduce the likelihood of things getting out of hand. 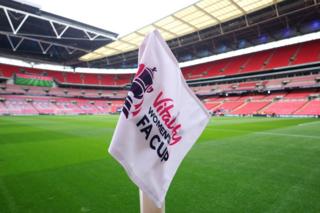 The UK's head of football policing, Chief Constable Mark Roberts, has said that clubs might need to look at bringing in physical measures which can deter pitch invasions, alongside strong punishments for those who behave violently on the pitch.

But he has told the BBC that this should not involve any suggestion to bring back fencing to keep fans off the pitch.

Fencing was a regular feature at football grounds until the 1989 Hillsborough disaster, in which 96 people died following dangerous crowding in the stadium.

Chief Constable Roberts said that some newer grounds like Wembley have different measures that make it difficult for people to get on the pitch quickly, but that can also be collapsed in need of emergency should you need to evacuate people on the pitch.

Premier League: What happened on the final day of the season?

Premier League: Which team will be champions? Man City or Liverpool?