UK Prime Minister Boris Johnson has visited Northern Ireland to discuss the next steps for the government with politicians there.

The country has been without a functioning government since February, and this looks set to continue after one of the political parties called the Democratic Unionist Party (DUP) said it won't be rejoining.

That's because it's not happy with part of the Brexit agreement reached between the UK government with the European Union, which has led to checks on trade goods travelling between Northern Ireland and the rest of the UK.

It has been 100 years since Northern Ireland's creation

Why is the Irish border a Brexit issue?

This means that no other parties can re-join either, because of how Northern Ireland's government is run; both the largest nationalist party and unionist party must agree to govern together.

This is called power-sharing and is part of the Good Friday Agreement, which helped to bring to an end a period of fighting and conflict in the region called the Troubles.

Unionists are those who want Northern Ireland to remain part of the United Kingdom, while nationalists want it to be part of the Republic of Ireland.

What happened at the recent elections? 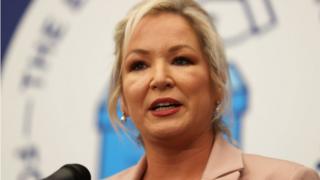 Elections were held on 5 May to elect members of the local assembly to Stormont, the home of Northern Ireland's government.

For the first time a nationalist party - called Sinn Fein - won the highest number of seats. Previously it had always a unionist party who had the most.

This meant that Sinn Fein's Michelle O'Neill would take on the role of First Minister, with the DUP taking the Deputy First Minister post - but last week the DUP said it wouldn't elect a speaker, something which is essential for the government to be able to run.

The party have continually said they will only agree to return if the Nothern Ireland Protocol is scrapped.

What is the Northern Ireland Protocol? 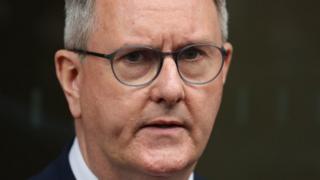 PA Media
Sir Jeffrey Donaldson is the leader of the DUP, the largest of the unionist political parties in Northern Ireland

The border is a sensitive issue because of Northern Ireland's violent past and politicians did not want new checkpoints there.

Instead, checks are now done when goods arrive in Northern Ireland from the rest of the UK (England, Scotland, Wales).

But this move is unpopular with unionist politicians, as they say it means Northern Ireland is treated differently from England, Scotland and Wales. They argue it has created a trade border between Northern Ireland and the rest of the UK.

What could be done to change the situation? 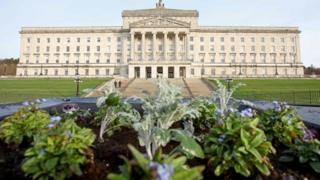 It is thought that the UK government could introduce legislation that would allow ministers in London to override parts of the Brexit deal on Northern Ireland.

The foreign secretary Liz Truss is expected to make a statement to the House of Commons on Tuesday announcing plans to make changes to the protocol.

Although Boris Johnson signed the deal he agrees changes are needed and that the protocol is now out of date.

The EU says if the UK tries to override the protocol it would be breaking the agreement it made, and that the EU could also take action.

What do people in Northern Ireland think?

Sinn Fein, a party who don't want Northern Ireland to be part of the UK, won the most votes at the elections there earlier this month.

This has led to lots of people talking about the future of this part of the UK - some people want Northern Ireland to be part of Ireland, other want it to stay part of the UK.

Shanequa spoke to some teenagers in Belfast, Northern Ireland's capital city to find out how they feel and what they want to see happen in the future.

Some children said they would like to see Northern Ireland become part of a Ireland, because they felt they shared a culture and hoped it would mean less division between nationalists and unionists.

Others felt that staying in the UK was better for Northern Ireland. Many said they wanted to continue receiving free healthcare from the NHS, and others were worried about the impact on trade and the price of goods if things changed.

One thing they are agreed on was wanting to see politicians from both sides working together to find solutions in the best interests of everyone in Northern Ireland.