The oldest living dog in the world - TobyKeith the chihuahua 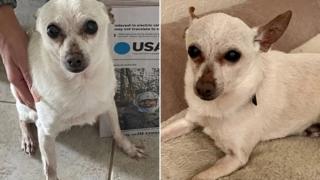 A new record for the world's oldest dog living has been confirmed - 21-year-old chihuahua, TobyKeith.

Born on 9 January 2001, he lives in Florida with his owner Gisela Shore who adopted him from an animal shelter where she volunteered when he was just a few months old.

He originally belonged to a elderly couple who called him Peanut Butter but after they weren't able to look after him any more Gisela gave him a new home - and changed his named to TobyKeith.

Meet the hero dog sniffing out explosives in Ukraine

YOU sent us your precious pooch pics

Most dogs live between 10 and 13 years, but chihuahuas often life longer with a typical life expectancy of 12-18 years.

As TobyKeith had been part of the family for such a long time Gisela and wondered if he might have set some kind of record for doggy age.

"When he turned 20 years everyone's reaction was WOW! My friends and family thought he was the oldest dog they knew about," she said. 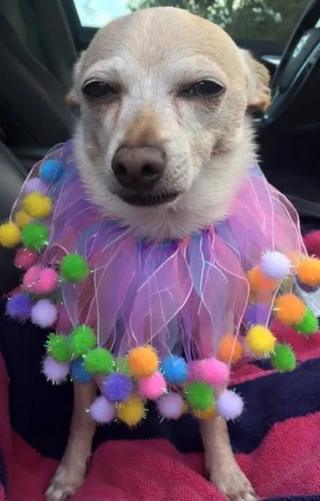 Gisela Shore
It looks like TobyKeith likes to dress up - and why not? At 21 he's allowed to celebrate ageing so well

She contacted Guinness World Records and, once his record was officially confirmed, Gisela celebrated with family and friends.

She said: "It definitely brought a big smile on my face!"

What is the oldest dog to have ever lived?

The oldest dog ever recorded was an Australian cattle-dog named Bluey, owned by Les Hall of Rochester, Victoria, Australia.

Bluey was obtained as a puppy in 1910 and worked among cattle and sheep for nearly 20 years. He died aged 29 years 5 months.

It wasn't just the humans celebrating either. TobyKeith got a bath, his nails trimmed and went for a car ride as a special treat.

He isn't Gisela's only pet pooch - she also has two other dogs; Luna, a seven-year-old American Bulldog and Lala, a three-year-old Chinese-crested.

We wonder if they can also match TobyKeith's record - if so, they have a long way to go!

Dog photos: YOU sent us your precious pooch pics