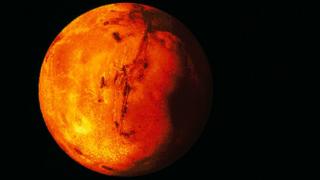 The speed of sound on Mars has been revealed after the Perseverance rover sent back audio recordings from the Red Planet.

An international team of researchers found that sound on Mars travels at speeds of around 240 metres per second.

That's much slower than here on Earth, where the speed of sound in air is about 343 metres per second.

The Perseverance rover landed on Mars over a year ago, and it has been gathering lots of information through cameras, sensors, and a microphone on-board since then.

Can life survive on Mars?

What else did Perseverance rover's recordings tell us? 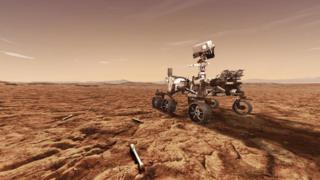 NASA
This illustration, provided by Nasa, shows Perseverance rover storing rock and soil samples in sealed tubes on the planet's surface for future missions to collect

A frequency in science is the number of times that a sound wave is produced within a particular period, especially within one second.

So, this finding suggests that two people having a conversation on Mars would find it extremely difficult,

This is because different parts of speech would arrive to listeners at different times, making conversations sound garbled.

The research was presented by Baptiste Chide, from Los Alamos National Laboratory, at this year's 53rd Lunar and Planetary Science Conference.

Mars robot feeling 'a bit unwell' after swallowing a pebble