Ukraine: Why has Russia invaded and what's happening there? 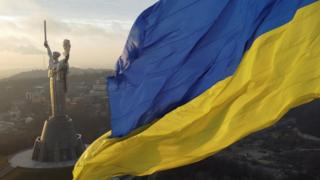 Prime Minister Boris Johnson has been to visit Ukraine to have a meeting with the President Volodymyr Zelensky.

During his visit in the Ukrainian capital city Kyiv, Boris Johnson discussed the creation of a new package of military and financial help for the country. This included things like providing armoured vehicles and other army equipment. 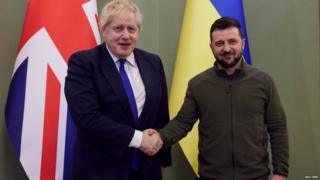 Mr Johnson also expressed his support for Ukraine in the ongoing war with Russia, saying: "I made clear today that the United Kingdom stands unwaveringly with them in this ongoing fight, and we are in it for the long run."

Here are some question you've been asking about the war, and some links to help you find Newsround articles on the issues.

War in Ukraine: What do all the words mean?

On 22 February 2022 Russia invaded one of its neighbouring countries - Ukraine.

There has been conflict between the two countries since 2014 and despite Russia building up a lot of troops on the border, many people were still shocked when Russian President Vladimir Putin actually sent the Russian army to invade.

But more than two million people who live there have had to leave as refugees to try to escape danger. 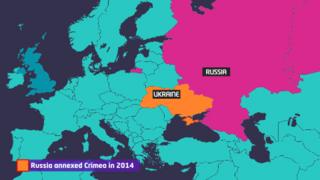 Ukraine is the biggest country in what's known as Eastern Europe and has the eighth biggest population of European countries. It's capital is Kyiv.

It is a neighbour of Russia and also shares a border with Poland, Belarus, Slovakia, Hungary, Romania and Moldova.

43 million people live there and it became independent in 1991 after the collapse of the Soviet Union (or USSR) which was a large communist group of countries, dominated and run by Russia after World War Two.

Ukraine glossary: What do the words people are using mean?

Why did Russia invade Ukraine?

The two countries have a long complicated history. Ukraine became independent in 1991, before then it was dominated by Russia.

Before the attack, Russia made demands including a promise that Ukraine would not join a group of countries called Nato.

The North Atlantic Treaty Organisation (Nato) is a military alliance of countries which includes the US and the UK which promises to defend each other if they are attacked.

Historically, Russia and countries that are a part of Nato have not always got on. Many people in Ukraine want the country to join Nato to avoid being dominated by Russia.

You can read more about the history between Russia and Ukraine here.

What's happening to people who live in Ukraine?

Ukraine is under attack which means it's a very dangerous place for ordinary people to stay.

The Ukrainian army is involved in the fighting, as are some citizens, but many people have left for neighbouring countries.

The United Nations thinks that in total more than two million people have had to flee.

This includes lots of children and young people who have had to leave their ordinary lives, friends and school behind.

Newsround went to Poland and met some young Ukrainians who had to leave. You can read their story here.

What help is being provided to refugees?

Many countries have offered to help people fleeing Ukraine.

That means a range of things such as allowing them to come and live in safety, offering support for things like food, healthcare and education for young people.

Charities are also raising money and offering ways for people to send bedding, clothes and blankets to places where refugees arrive and things like that are most needed.

'I feel good here, just like in my school in Lviv'

Ukraine evacuation: 'We're just doing whatever we can'

What help is the UK offering to Ukrainians? 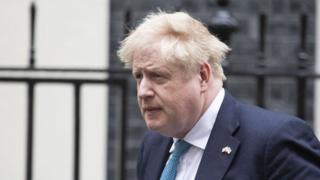 Like many countries the UK has promised to help families fleeing Ukraine.

UK Prime Minister Boris Johnson had already said that the UK could take in 200,000 Ukrainian refugees and that businesses will also be able to sponsor a Ukrainian to come to the country for a year.

The UK has gradually widened the number of people it can offer places to in the last few days - allowing three-year stays for parents, grandparents and siblings as well as "immediate family" of UK nationals or people who live here and have permission to remain in Britain.

A scheme has also been launched called Homes for Ukraine and it will be used to match Ukrainians with families in the UK who can offer shelter and accommodation.

The UK says it is looking at ways to increase the number of visas available for Ukrainian refugees, but there has also been criticism that current rules and systems are too complicated and too strict.

What can I do to help? 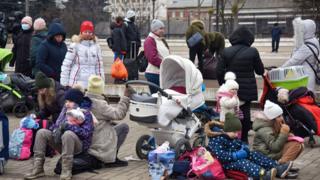 Getty
Refugees from Ukraine are moving into neighbouring countries like Poland

As the war in Ukraine continues following its invasion by Russia, many people in the UK and around the world are looking for ways they can help.

You may be doing fundraisers organised by your teachers in school or seeing charity appeals on TV or online - many groups are offering support in the crisis.

By 7 March, a special UK appeal by a group of charities had raised over £100 million.

If you feel you want to do something to help but aren't sure where to start, then have a look at this page - remember to speak to a parent, a teacher or an adult you trust, who can help point you in the right direction.

What's being done about Russia's actions?

In Ukraine the army is fighting against the Russian army - many other countries are sending them weapons to help them fight.

Outside of Ukraine, rather than getting involved in the fighting which they argue could make things worse, countries are using economic measures to put pressure on President Putin, on his close advisors and on the economy of Russia to try to force Mr Putin to stop.

These measures include actions like freezing access to large amounts of money being held abroad by billionaires - often called oligarchs - who are believed to be close to Mr Putin, stopping banks and Russian companies from being able to do their business as normal.

Also selling oil and gas to other countries is a big part of Russia's economy and countries are starting to cut back on how much Russian energy they will buy.

Some companies have also paused, slowed down or stopped doing business in Russia at all and Russia has been kicked out of big events like Eurovision, international football and other musical and sporting events.

Over time this could make life very difficult for Mr Putin and for the Russian people.

185 comments
Back to top
unknown