Russian forces have launched a military attack on Ukraine, with reports of explosions near major cities across the country.

Russian President Vladimir Putin appeared on Russian TV saying he did not plan to occupy Ukraine, but warned other nations not to try to stop them. He also urged Ukrainian soldiers to lay down their weapons.

Shortly afterwards, attacks were reported on Ukrainian military targets and Russian military vehicles were said to have crossed the border in a number of places.

The Foreign Minister stressed that Ukraine "will defend itself" and that "the world can and must stop Putin".

If you're upset by what's going on in the news at the moment, read our guide 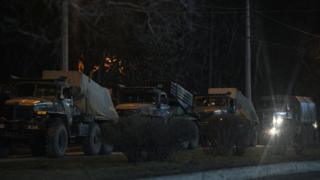 Putin under pressure over Russian actions in Ukraine

What's the current situation in Ukraine?

This latest action from Russia comes after months of tensions between the two countries, as Russia moved lots of soldiers to its border with Ukraine.

He declared the two regions as 'independent states', and argued that people in these breakaway regions of eastern Ukraine had called for military help from Russia.

What has happened overnight? 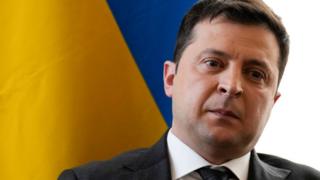 Getty Images
Ukrainian President Volodymyr Zelensky said his country was ready for a Russian attack, vowing, "We will defend ourselves".

Ukraine entered a month-long state of emergency at midnight on Thursday local time, which is 10pm UK time.

A few hours later Russian President Vladimir Putin made his own speech on TV announcing a "military operation" in Ukraine's Donbas region.

President Putin said Russia demanded that the Ukraine military lay down their weapons, and warned other nations not to interfere.

Ukraine's foreign minister has accused Russia of starting a full-scale war, and urges the UN "to do everything possible" to stop it.

What has been the response to Russia's actions? 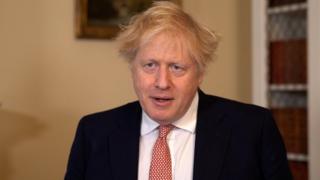 UK Prime Minister Boris Johnson said he was "appalled by the horrific events in Ukraine" and that President Putin "has chosen a path of bloodshed and destruction by launching this unprovoked attack".

The PM said in a TV address that the UK "cannot and will not just look away" at Russia's attack on Ukraine.

Mr Johnson said President Vladimir Putin had launched a "vast invasion by land, by sea and by air" without provocation.

He said the UK and allies will launch a "massive package" of sanctions to "hobble" Russia's economy.

Sanctions are various financial punishments that will affect Russia. On Monday the UK had already announced sanctions against five Russian banks.

Earlier this morning, the PM spoke to Ukraine's president to discuss how to respond and promised decisive action by the UK and its allies. 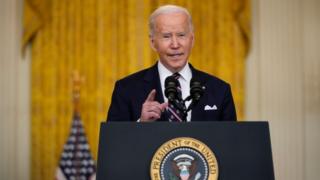 US President Joe Biden has said that the world will hold Russia accountable for what he called an "unprovoked and unjustified attack by Russian military forces".

He says "the prayers of the entire world are with the people of Ukraine".

Mr Biden said he will be monitoring the situation from the White House and will meet with G7 leaders in the morning before announcing "further consequences" for Russia.

The head of Nato, Jens Stoltenberg, says they stand with Ukraine, and will do all it takes to defend all allies.

Russia had previously made a list of demands, including banning Ukraine from ever joining Nato, and said it would only pull its armies back if its conditions were met.

What is happening in Ukraine? 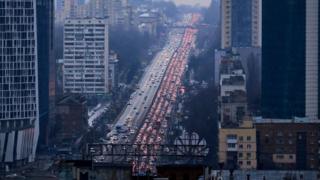 BBC reporter Paul Adams in Kyiv has said he has heard five to six "distant explosions" in the Ukrainian capital, and says reports are coming in of explosions elsewhere in the country.

In the capital of Kyiv, an emergency siren has gone off, and pictures show streams of cars as people leave the city.

There are reports of queues in supermarkets and people withdrawing money at ATMs.

In a late-night address to the nation, Ukraine's President Volodymyr Zelensky vowed "we will defend ourselves" in the event of an attack.

256 comments
Back to top
unknown