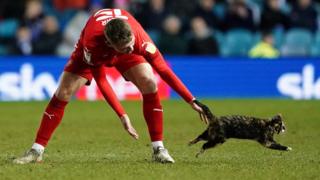 PA Media
Players tried to catch the cat, which brought the game to halt

A cat which stopped a football match by running onto the pitch had been missing for months its owner has said.

The moggy, named Topsey, ran on to the pitch during Sheffield Wednesday's game against Wigan Athletic at Hillsborough on Tuesday night.

After giving players the run around, Wigan defender Josh Kerr managed to scoop up the cat and get it to safety.

From there Topsey was taken to a vet who discovered she had a microchip, which meant they were able to get in touch with her owner.

Cat found after 8 years away

Topsey's owner, Alison Jubb told the BBC her cat had been missing since June.

"My daughter-in-law rang me last night as they were watching the match and said there was a cat on the football pitch. I sort of laughed it off," she said. 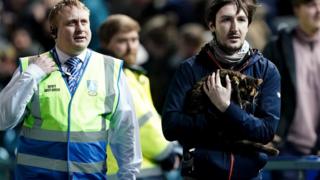 She later got a call from the vets to confirm the pitch invader was indeed Topsey.

Sam from Spire Vets said Topsey had been given "strong pain relief and antibiotics".

"She is stable and staying in a kennel overnight, we gave her some food and she ate it," he said.

Why are there calls for all cats to be microchipped by law?

Cat found after 8 years away