Vote: What do you think of the Trafalgar Square Christmas tree? 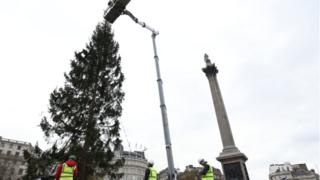 Every year a giant Christmas tree is put up in London's famous Trafalgar Square - but this year people haven't been all that impressed with the one that has gone on display.

It was sent as a gift from Norway - a tradition that dates from 1947 - thanking Great Britain for its help during the Second World War.

But some people have called this year's tree "spindly" and "sad looking", observing that it "wasn't very Christmassy".

Christmas tree recycling: What is best for the environment?

This isn't the first time people have criticised the tree sent from Norway for its appearance, with people describing last year's tree as tired looking.

The annual lighting ceremony, where the Lord Mayor of Westminster and the Mayor of Oslo come together, took place this week - so perhaps now that the tree has some sparkly lights and decorations on, people will be less unhappy. 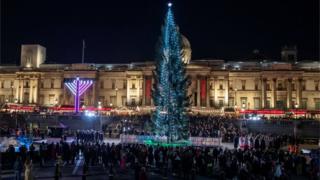 Reuters
People gathered to see the lights being switched on, alongside decorations for Hanukkah

Typically a Norwegian fir, from a forest in the region of Nordmarka, is transported to London and, due to the size needed, the tree is often quite mature - more than 50 years old.

This is something Steve Orton, from Forestry England, says people can often forget.

He told one newspaper: "Anything over 10ft is a proper tree, an old tree growing on its own in the wilderness.

"It's not a shrub any more. Anything that looks like a Christmas tree, even with some gaps or droopy sides, is impressive.

"Norway does remarkably well to find such a nice one each year. It's a lot of effort. I have lots of respect for them. People forget this is a natural product. It's not grown and shaped on a farm. 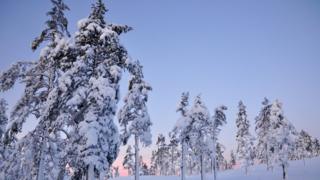 He thinks people should pay the tree a little more respect, and said that as the tree can be seen from all angles - not pushed up against a wall like in someone's house or a public building - it's very hard to find one that matches people's expectations.

Trees don't naturally grow in the same way on all sides and can easily be damaged by weather or birds and animals nesting in them.

You also need to add in the distance the tree has travelled. 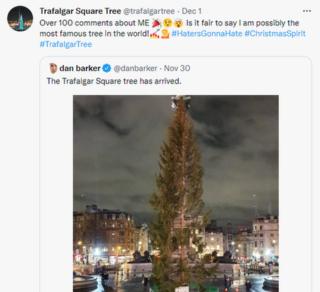 "Transporting such a huge tree isn't easy," he explained. "These trees are quite delicate.

"Have a joke, but Norway isn't trying to be rude. I wouldn't want them to stop sending one."

What do you think of the Trafalgar Square tree? How does it compare to the tree and decorations in your local area?

Vote and let us know in the comments.

Christmas tree recycling: What is best for the environment?