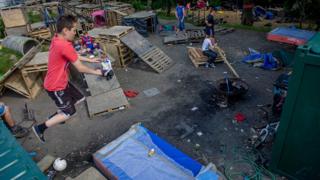 Getty Images
It might not look like a traditional play park but The Land in Wrexham, Wales is a specially designed to help children experiment with risk, challenge and creativity!

Imagine the scene: you've got a free Saturday afternoon and fancy heading to your local park or playground.

For many of you, this will involve leaping from stepping stone to stepping stone, heading down colourful slides, or challenging yourself on the climbing frame.

But several child play experts have told Newsround that playgrounds in the UK could create more of a feeling of risk when using them, while still being safe for children to use.

Dr Helen Dodd, a professor of child psychology at Exeter University says play parks need to have built in risk factors to them, giving children essential opportunities to "find the edges of their comfort zone".

Fancy some Autumn fun? Take a look at these ideas

How to carve a pumpkin 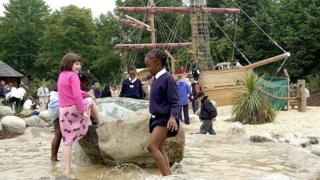 Getty Images
Many of the most popular play parks in the UK are located in London, such as The Princess Of Wales Memorial Playground In Kensington Gardens.
Why are parks and playgrounds more fun when they are more risky?

As human beings, it is natural to feel nervous about trying new things.

This includes things like trying to take on an obstacle in a playground you haven't done before.

You sometimes get "butterflies" in your stomach, which are a physical demonstration adrenaline, a hormone your body produces when you are excited or scared.

Dr Dodd says this reaction is essential for people to experience during childhood as it helps us work out what is safe to do and what is too risky for us. 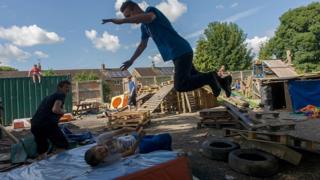 Getty Images
Children from the age of five are encouraged to test their limits on the play equipment at The Land.

These are skills we use over and over again in adulthood and are seen as building blocks for making good decisions later in life.

If you overcome common fears and achieve a feat you never thought possible, like climbing higher than you ever have before, you will gain confidence and enjoy the experience even more.

"As adults who care about children, none of us want to see kids getting injured," says Dr Dodd.

"But when adults try very hard to keep kids safe, what can happen, is we forget what they need and want from their play.

"So adults design playgrounds with safety in mind, but don't think enough about how important allowing a child to explore their boundaries independently are".

Many UK playgrounds can be designed using what has been dubbed the "KFC" approach - Kit, Fencing and Carpet.

They feature some sort of "kit" (a slide, some swings and perhaps a climbing frame), a dog-proof fence around it, and a soft, squishy surface to run and fall on.

This approach is often argued to be too simplistic and stale - it's less fun for kids to explore and teaches them very little about pushing their own boundaries of risk. 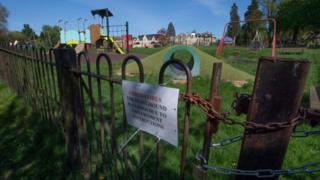 Getty Images
Many play parks across the UK were closed throughout much of 2020 due to coronavirus restrictions.
Why are some playgrounds boring?

Playgrounds became popular at the start of the 20th century, with the introduction of staffed adventure playgrounds coming a little later.

After the Second World War, authorities made the most of recycled 'junk', turning bomb sites, building sites and wastelands into areas designed for children to explore and play in.

Since then playground equipment has been reinvented to be safer and more visually appealing.

Slides, swings and climbing frames became more common, and were made out of metal, plastic and wood. 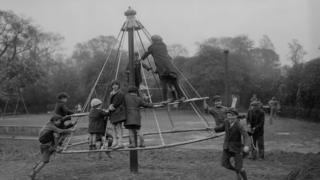 Getty Images
Children on a witches hat in 1930's London - these were banned in the 1980s after a series of accidents.

However, in the 1980s, safety became a huge issue after a number of serious accidents, including some from dangerous or worn-out equipment.

After complaints from parents and campaigners, the government and local authorities brought in more strict health and safety rules, which led to many parks having challenging and dangerous equipment removed.

Tim Gill, a writer and advocate for children's play, says that adventurous playgrounds are once again on the rise.

"Over the last 15 years things have balanced out as experts have been agreeing that play parks were becoming too boring for kids!"

"Thankfully some safety standards have been relaxed, and playground designers have become more creative, allowing for more fun, adventurous play" 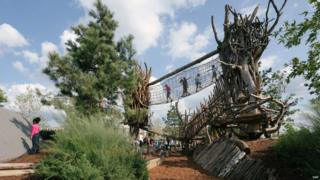 German and Danish playgrounds are often celebrated for their higher fear-factor, with towers reaching as tall as ten metres.

Research has also shown that children prefer more natural-looking playgrounds made of wood, stones and featuring water, sand and the existing environment.

One UK playground that has been celebrated for it's creativity and good safety-to-risk ratio is Tumbling Bay Playground in the Queen Elizabeth Olympic Park in East London.

What do you think makes a great playground? Let us know in the comments section below!

201 comments
Back to top
unknown