Boris Johnson: COP26 can be 'turning point' for climate change 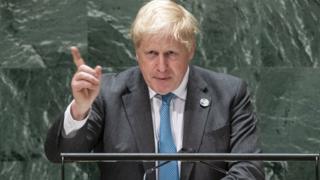 Prime minister Boris Johnson has told his fellow world leaders that now is the time to listen to scientists and act on climate change.

He was speaking at the United Nations headquarters in New York, just 40 days before COP26 begins in Glasgow.

The UK PM said the summit will be the "turning point for humanity".

He warned that global temperature rises were inevitable but urged his fellow leaders to make major changes in their nations to reverse the damage already done.

What do YOU think about climate change?

How worried are YOU about the environment? Try Newsround's survey

Do YOU think adults are listening on climate change?

"It's time for humanity to grow up," he said.

The prime minister, who is in the United States for important meetings with the US President and other leaders, said it was time to listen to the warnings of scientists.

"Look at Covid if you want an example of gloomy scientists being proved right," he said.

Scientists and researchers around the world have been praised for their efforts in the fight against the coronavirus pandemic, as the rollout of vaccinations and life-saving medicines continues. 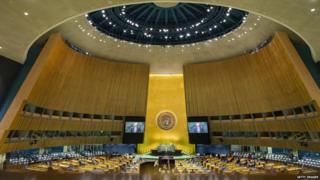 COP26 is a big meeting where 196 heads of state from the world's most powerful countries will discuss the climate crisis and how to prevent further global warming.

Mr Johnson referenced Kermit the Frog, saying the Muppet was wrong when he sang "It's Not Easy Bein' Green."

Mr Johnson also urged large nations to take more responsibility for their actions, and said he wanted them to make improvements in four areas - "coal, cars, cash and trees".

Coal - Burning fossil fuels like coal creates power but has a big impact on the environment. The UK has cut its use of coal in recent years but other countries still rely on the method for their electricity and other services.

Mr Johnson praised China's President Xi Jinping for his recent promise to stop building new coal-fire energy plants abroad, but as the world's largest nation is responsible for 28% of global greenhouse gas emissions, he urged the country to do more.

Cars - The use of motorcars and other fuel-powered vehicles has a huge impact on air pollution. The fumes from petrol and diesel engines create greenhouse gases which warm up the Earth's atmosphere, causing long-term issues for eco-systems and sea temperatures.

Cash - The Prime minister says investing more money into things like environmental projects, scientific studies about the climate and renewable energy will all help the planet and its natural resources.

Trees - Planting trees in a sustainable way and curbing deforestation will also help, as trees help to absorb greenhouse gases like carbon dioxide and produce oxygen. They also prevent flooding and soil erosion.