All children aged 12 to 15 in the UK are to be offered a single dose of a Covid vaccine.

It follows advice from all four of the UK's chief medical officers, who said vaccines for children will reduce disruption in schools and mean fewer children will miss classes.

The roll-out will begin in Scotland and England from 20 September with some children being offered the jab in schools while in Scotland children aged 12-15 will be able to go to clinics or wait for a letter offering an appointment.

It will be up to children and their parents as to whether they decide to have the vaccine or not.

There are still no plans to vaccinate children under the age of 12.

Why don't some people want to take vaccines?

Vaccines Minister Nadhim Zahawi said invitations for the Pfizer-BioNTech jab will begin in England next week after advice from the UK's chief medical officers that the vaccination will reduce disruption to education.

"We know vaccinations are our best defence against this virus," Mr Zahawi said. "They have built a vast wall of defence for the British people."

Scotland will begin vaccinating children aged between 12 and 15 from Monday 20 September.

The jabs will initially be available for children who want to visit drop-in centres with a parent or carer.

Letters will be sent everyone in the age group the following week, inviting them to an appointment.

There will also be a vaccination programme in schools after the scheduled appointments.

The First Minister Nicola Sturgeon said: "I know that these are important decisions for young people and their parents, and that many will have questions.

"I would encourage everyone to read the information that will be provided, and do not hesitate to visit a drop in clinic to ask any questions or raise any concerns.

"Vaccination is a vital part of our overall protection against this virus. That is why it is important to support people - especially young people - to make informed choices that they feel comfortable with".

Children aged 12 to 15 years old in Northern Ireland are to be offered a first dose of a Covid-19 jab soon, the Department of Health has said.

Health Minister Robin Swann said the move will help to protect young people from catching the virus and that he has "carefully considered" advice provided by the four UK chief medical officers.

"This move will help protect young people from catching Covid-19 and is expected to prevent disruption in schools by reducing transmission," he said

Consent forms for vaccination will be sent out in schools in Northern Ireland "shortly".

Jabs for 12-15 year olds have also been given the go-ahead in Wales, with invitations for jabs due to be sent out.

Welsh Health Minister Eluned Morgan said parents will have to weigh up the "risks and benefits", but warned that there is a chance children can become unwell with long Covid if they don't receive a vaccine.

She added that vaccines will hopefully mean disruption to education is avoided.

"The key concern for us is that we don't want to disrupt children's schooling any more than it has [been] already," she said.

Why has there been lots of discussion about children receiving the vaccine? 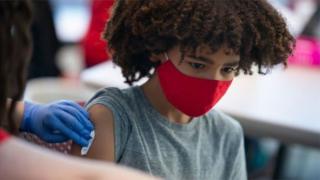 There's been lots of discussion about whether children in the UK should be offered the coronavirus vaccine.

Scientists have been trying to work out whether it's worth giving the vaccine to children when the risk of healthy children becoming seriously ill from Covid is very low.

The Joint Committee on Vaccination and Immunisation (JCVI) is an independent group that advises the government on health and vaccines.

Earlier this month, the JCVI focused on the health benefits of vaccination to children themselves - not on the impact to schooling or other people and said that they did not recommend all 12-15 year olds should be vaccinated.

The concern was based on an extremely rare side effect of the Pfizer vaccine which can cause heart inflammation in some people.

The JCVI did recommend that the Chief Medical Officers look at the wider benefits of vaccination, including the effect on education.

The medical officers said their recommendation, that children aged 12-15 should have a single jab, was made after considering the "effects on education".

They added that healthy children should be offered a single dose of the Pfizer vaccine "as soon as possible", saying that the vaccines are "a useful tool to reduce the disruption" of children missing school".

More on what the JCVI said:

Covid vaccine not recommended for most 12-15 year olds

Was the way the decision was made confusing? 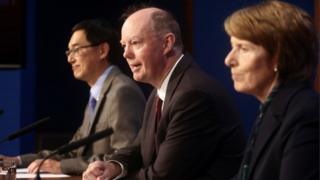 On Monday, the Chief Medical Officers were asked whether the decision was confusing because the JCVI had said one thing and the CMOs then said something different.

Prof Chris Whitty, Chief Medical Officer for England, said there was "no conflict" and that the JCVI had agreed that there is some benefit to vaccinating children.

He added it was "a difficult decision" to decide whether to vaccinate 12-15-year-olds and that it was about "balancing risk and benefit".

He explained the decision had been through several stages - with more than 2,000 children studied as part of vaccine trials.

Dr June Raine, head of the MHRA, a group of medical professionals that decide if medicine is safe, said the results were "extremely positive" and side effects were "very rare".

What else has been said? 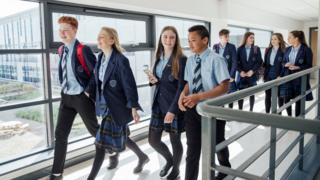 Health and Social Care Secretary Sajid Javid said he accepted the recommendation from the officers aimed at protecting young people from catching Covid, reducing transmission in schools and keeping pupils in the classroom.

"Our outstanding NHS stands ready to move forward with rolling out the vaccine to this group with the same sense of urgency we've had at every point in our vaccination programme," he said.

In their advice to the government, the chief medical officers said they recommended vaccines on "public health grounds" and it was "likely vaccination will help reduce transmission of Covid-19 in schools".

They added that they think a single dose of the vaccine will significantly reduce the chance of a young person getting Covid and passing the virus on.

"They will also reduce the chance an individual child gets Covid-19. This means vaccination is likely to reduce education disruption," they said.

The chief medical officers said missing face-to-face school had a "massive impact" on children, both physically and emotionally in terms of their mental wellbeing.

Vaccine to be given in schools

The parents of children receiving the vaccine will be asked to give permission.

If parents and children disagree about having the vaccine, then the child can make that decision on their own, if it is decided that they are capable of doing so.

Children in the 12-15 age group with health conditions and those living with clinically vulnerable people have already been told they can get the vaccine.

Young people aged 16 to 18 are also able to book an appointment to receive a vaccine.

What does 'clinically vulnerable' mean?

Clinically vulnerable means those who are at greater risk of becoming seriously ill or needing hospital treatment with coronavirus - usually because of an underlying medical condition.

Will children under 12 get the vaccine?

No vaccines are yet approved for use in children under the age of 12 and there are no plans currently for children under 12 to receive the vaccine either.

"Let's not rush that one at all," Prof Whitty said.

143 comments
Back to top
unknown