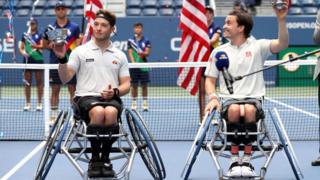 Gordon Reid and Alfie Hewett have joined Emma Raducanu as history makers at the US Open this weekend.

Reid and Hewett have become the first British pair to win all four wheelchair Grand Slam double titles in the same year.

They are the first to win the men's doubles at the Australian Open, French Open, Wimbledon AND the US Open in the same season.

The pair beat Argentina's Gustavo Fernandez and Japan's Shingo Kunieda 6-2 6-1 in the US Open final on Saturday.

When sport becomes a fairy tale ...

What do young tennis players think of Emma Raducanu?

Gordon and Alfie's win at the final on Saturday is their 13th Grand Slam title together.

Gordon Reid said: "To come here and finish the year strongly together, it's a good feeling... we've grown stronger and stronger every year."

"I think the results that we've had is showing that that's paid off." 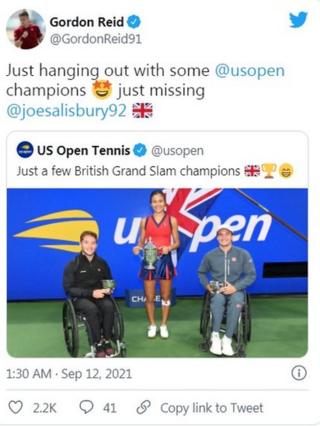 Twitter/Gordon Reid
Gordon posted a photo of the pair with Emma Raducanu to celebrate their incredible achievement.

Alfie Hewett was hoping to win another trophy on Sunday in the men's wheelchair singles final at the Open, but was beaten by Shingo Kunieda, by 6-1 6-4.

Gordon and Alfie both made the Paralympic men's doubles final in Tokyo but were beaten by Frances' Stephane Houdet and Nicolas Peifer.

The US Open could be Alfie Hewett's last Grand Slam as new disability classification rules mean he may not be eligible to take part.

Do you have a message of congratulations for Alfie and Gordon?

Gaming: Would you like having an e-sports tournament at school!