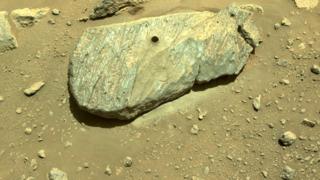 Nasa has confirmed that the Perseverance rover has successfully collected its first rock sample on Mars.

It's an historic moment. The core represents the first ever rock section collected on another planet intended for return to Earth.

Images taken by a camera on the rover confirmed that the rock was safely stored inside the titanium sampling tube.

This was the second attempt at coring a sample, after the first attempt images revealed that no rock was stored the tube.

Perseverance will continue its journey across Mars and collect more samples before returning the data back to Earth later this decade.

Can life survive on Mars? 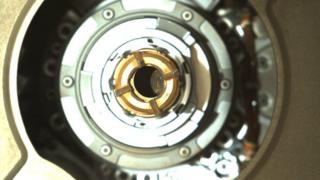 The Perseverance rover landed in Jezaro Crater on Mars back in February, and it's purpose is to search for samples that could help scientists on Earth learn more about life on Mars.

Scientists working on the project believe the crater once held a lake billions of years ago, which could mean the rock in the crater could hold traces of microbial life.

The rover has travelled 1.2 miles from its landing spot to a raised ridge called "Citadelle", where scientists chose a slab of rock to core into called "Rochette". 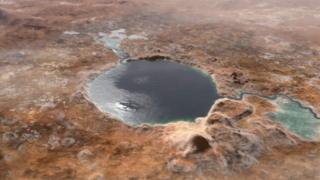 The rover uses a drilling system which is attached to its long arm to collect a finger sized sample of the rock.

Once the coring process has finished, images are taken of the titanium tube that the rock is stored in, to confirm to the team back on Earth that the sample is stored safely.

After the first drilling attempt, images revealed that there was nothing in the titanium tube - scientists suspect the rock was too weak and crumbled out of the tube.

Nasa: The space agency are looking for volunteers to pretend they are on Mars

Mars: Largest Martian meteorite ever found to go on display