An elephant in Sri Lanka has given birth to twin calves in a Sri Lankan orphanage, which is the first time in the country for 80 years.

The rare twins were born in the Pinnawala elephant orphanage in the central hills of the country, which is home to 81 wild elephants.

The male twins and their mother, Surangi, are all said to be in good condition.

Renuka Bandaranaike, head of the Pinnawala Elephant Orphanage, said: "Both the calves and the mother are doing fine.

"The babies are relatively small, but they are healthy."

Beavers set to be reintroduced to London 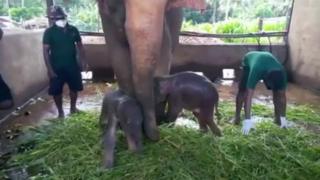 The twins' mother, 25-year-old Surangi, gave birth to a male calf in 2009 - the twins are from her second pregnancy. The twins' father is called Pandu.

According to Sri Lankan expert, Jayantha Jayewardene, the last time twins were born to domesticated elephants in the country was 1941.

The orphanage the elephants live in was set up in 1975 to care for wild elephants in the country.

According to official records, there are around 7,500 wild elephants in Sri Lanka - and they just got two more!