Dinosaurs: The biggest triceratops skeleton ever discovered is being sold! 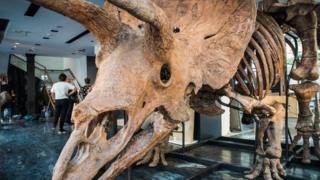 Dinosaurs are known to have been giant creatures when they walked the face of the Earth millions of years ago.

Now, one fossil, which is believed to be the remains of the largest triceratops dinosaur ever discovered, is going up for auction!

It has gone on display at an auction house in Paris ahead of its sale in October and it's thought it could sell for up to £1.5 million.

The triceratops is thought to have roamed what's now known as South Dakota, a state in America, more than 66 million years ago.

The dinosaur has been named 'Big John' after the owner of the land where its bones were found.

How do scientists collect rock samples from Mars?

Can octopuses throw things at each other?

The weird and wonderful items heading into space

Palaeontologists, which is the official name for scientists who study fossils, found the first piece of the dinosaur's skeleton back in 2014 and have since found 60% of its bones, including the majority of its skull.

The skeleton is an impressive eight metres long, and the skull and collar of the dinosaur alone are 2.62 metres long, two metres wide and weigh more than 700kg - that's the same as about seven elephant calves! 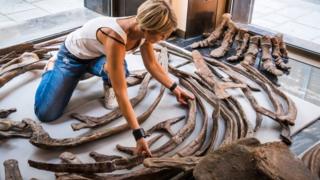 Iacopo Briano, who is a palaeontologist who looked after the reconstruction of Big John, said the skeleton is 5-10% bigger than any other triceratops found before.

1. The name triceratops, which comes from the Greek language, means three-horned face.

2. Despite its scary appearance, the triceratops was actually a herbivore!

3. Triceratops had hundreds of teeth! These were arranged in groups called batteries and the dinosaurs used their gnashers to chop through tough vegetation.

"It's a masterpiece," Briano told FranceInter radio. "There are quite a few triceratops skulls around the world, but very few of them almost complete."

More than 200 bones were carefully put together to build the triceratops and the public now has a clear idea of just how big the beast would have been.

The skeleton has a huge hole on the collar, which is believed to be a scar the triceratops gained after battling a rival. 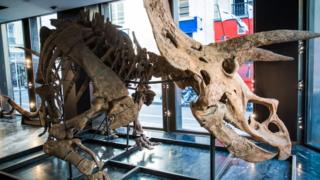 EPA
The fossil could fetch around £1.5 million

"I imagine there are about 10 buyers worldwide for this kind of piece," said auctioneer Alexandre Giquello, who is leading the sale.

It looks like Big John could a new home very soon!

What do you think of Big John? What dinosaurs are your favourite? Let us know in the comments!

Triceratops and Torosaurus are different species

Quiz: Which dinosaur are you?