Racism in football: What do young people think after Euro 2020? 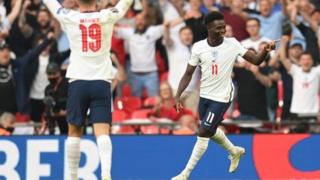 It was the first time they've played at Wembley Stadium since the Euro 2020 final - which was overshadowed by racist abuse directed at three of England's black players.

Among those who suffered abuse was Bakayo Saka who last night marked his 20th birthday by netting the fourth goal in a 4-0 win which was greeted by huge roars from the crowd.

But last week England's players were again racially abused by sections of the crowd during their match in Hungary last week.

This was the latest episode of racism in football - something which has long been a problem in the sport. So how do young fans feel about it? De-Graft went to speak to some.

Lots of England's young black players were the stars at Euro 2020 as the team made it to the final - the furthest they've got in a tournament for more than 50 years.

But when they lost the final to Italy on penalties, some of the players including Marcus Rashford, Bukayo Saka and Jadon Sancho were all targeted online and on social media after missing penalties in the decisive shootout.

De-Graft spoke to young people in Manchester - not far from where Marcus Rashford's mural was defaced. 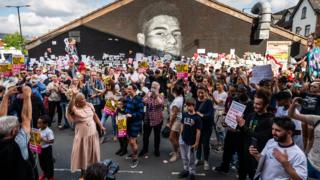 They told us that they don't feel positive about racism around football and think that despite investigations into those doing the abusing, racism would show its face again.

They also felt it was down to lots of different parts of the community to stop it happening. They suggested teachers and parents have a role to play, as do social media companies in how they treat the accounts of people who commit racist abuse.

All felt there needed to be consequences for those who racially abuse others in real life and online.

Personally I just think it's down to the whole UK as a whole... Teach your kids about it so it doesn't last any longer

Although racist abuse in football is sadly not new, racism and the England men's team has become a major talking point.

Over many years, England's black players have suffered at the hand of supporters of other teams, but also from England fans themselves, with players targeted in the stadiums and online.

In 2020, the Black Lives Matter (BLM) movement became known across the world after George Floyd was killed by a police officer in the US and many footballers in the UK and Europe began to take the knee before games.

The team have said, time after time that for them the act of kneeling is to show solidarity for campaigns against racism and to support calls for equality for black people in Britain and around the world.

But the association with the Black Lives Matter movement has caused some controversy and It has led to some fans in the stadiums booing the players as they take the knee. Lots of people - including players in the game - have accused these fans of being racist.

Some fans who are unhappy about players taking the knee say that the booing isn't racist, instead they say the act of kneeling is too political and is diverting attention away from sport and football. 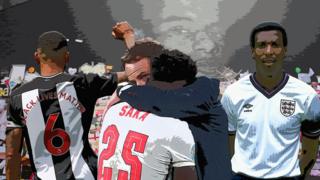 Following England's penalty defeat to Italy in the Euro 2020 final in July, racism dominated the headlines again as Marcus Rashford, Bukayo Saka and Jadon Sancho were all targeted on social media.

After the three black players missed their penalties in the final shootout, they received thousands of racist messages online.

A mural of Rashford in his home town of Withington in Manchester was also vandalised.

England manager Gareth Southgate and Prime Minister Boris Johnson both spoke out and condemned the abuse but fellow England player Tyrone Mings accused government minister Priti Patel of failing to support the players enough when some fans booed their decision to take the knee before games.

"I don't want any child or adult to have to receive the hateful and hurtful messages that me, Marcus and Jadon have received this week," he said.

"I knew instantly the kind of hate that I was about to receive and that is a sad reality that your powerful platforms are not doing enough to stop these messages." 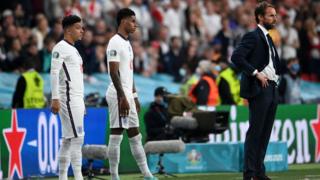 Following the Euro 2020 final, there were calls for social media companies to ban anonymity on their platforms.

Social media company Twitter said "ID verification would have been unlikely to prevent the abuse from happening" because 99% of account owners were identifiable. Following an investigation, 11 people in the UK were arrested for online racism.

In July, the government announced plans to ban people who abuse footballers online from stadiums for up to 10 years. Boris Johnson also revealed plans to fine social media companies who fail to stop racist behaviour on their platforms. 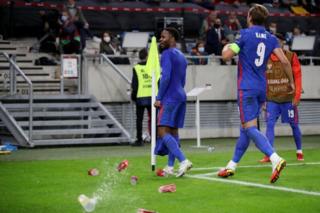 In their first match since Euro 2020, England's black players were targeted with racist abuse by sections of the crowd during a match against Hungary.

England were playing Hungary in Budapest as part of the World Cup 2022 qualifiers. 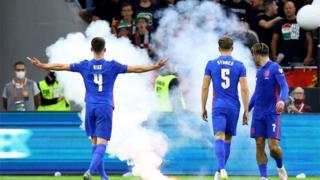 Fifa has launched an investigation into the racial abuse aimed at the England players during the Hungary match.

Prime Minister Boris Johnson has urged Fifa "to take strong action against those responsible to ensure that this kind of disgraceful behaviour is eradicated from the game for good."

Racism in Football: ‘I’m not going to let racists stop me playing the game I love’

114 comments
Back to top
unknown