"It's insane. It's unbelievable" says skateboarder Sky Brown, who is making history at the Tokyo Olympics.

At 13 years old she is the youngest athlete on Team GB and this is also the first time her sport - skateboarding - is in the Games. It means if she wins an Olympic medal, she'll be among the first people to ever do so.

Her mum is from Japan - the country hosting this year - and her dad is from the UK.

She says it's cool to be in Japan: "I can't really go out anywhere but being with Japanese people and eating good Japanese food makes me feel comfortable and happy."

It was my dream to be one of the youngest here and show girls that it doesn't matter how old or young you are, you can do anything. It's a dream come true.

Sky is staying in the Athlete's Village which she says is also really cool because she keeps seeing other athletes from lots of different countries who are "super strong" and "super tall"!

She'll be competing in the skateboarding park contest on Wednesday and thinks "it's going to be really fun and really fun to watch". 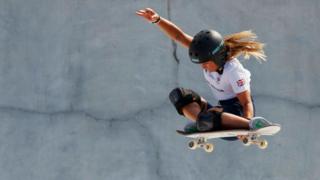 Ahead of her event she says she's feeling good: "I'm going to really try to get on the podium and get a medal, get a gold hopefully. No matter what happens I just want to inspire girls around the world.

"Hopefully they can see this girl here and think 'If she can do it, I can do it too'. That's my goal. That's why I want to be in the Olympics."

Simone Biles is back and wins bronze!

"It was definitely a heavy time for my parents, my family, for me, for everyone. It was a big accident but I got through it and I'm feeling stronger than ever."

I'm excited to show the world how beautiful skateboarding is. 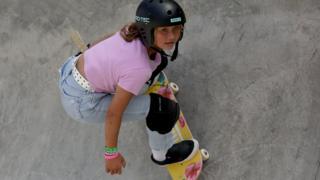 Has preparing for the Olympics taken any of the fun out of skateboarding? Definitely not.

She said: "It's still just a fun thing. It's like my playground. It's just fun. I love it."

She has this advice for anyone wanting to give skateboarding a go: "Get out and try it. You do need to take baby steps - enjoy and have fun. You can't skate if you're not having fun!"

The scale of the Olympics and what she has already achieved aren't lost on her.

She said: "I want to tell all the girls out there that they've got it. Believe in themselves, take baby steps and enjoy."