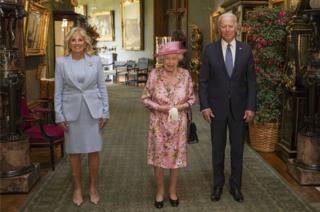 The Queen and President Joe Biden have met for the first time since he got the US's top job.

President Biden has said that the Queen reminds him of his mother and that he has invited her to the White House.

"We had a long talk," he said. "She was very generous. I don't think she'd be insulted but she reminded me of my mother. In terms of the look of her and just the generosity. She was very gracious."

Since arriving in the UK on 9 June, the president has attended the G7 summit, met with Boris Johnson and his wife Carrie and had a meeting with the Queen.

After his meeting with the Queen, he flew to Brussels to continue his international visits.

UK and US to give leftover vaccine doses to poorer countries 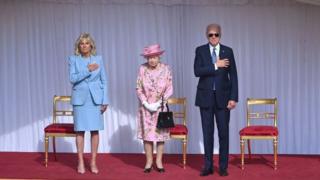 Getty Images
During a guard of honour, the US national anthem was played

Her Majesty greeted them and then a guard of honour, which was formed of the Queen's Company First Battalion Grenadier Guards, gave a Royal Salute, and the US national anthem was played.

A guard of honour is a special display of troops to mark a special occasion, like a head of state visiting.

Mr Biden then inspected the guard of honour alongside one of the Queen's Officer Commanding the Guard of Honour. This task was usually carried out by Prince Philip, who died in April 2021.

The visit in total lasted around an hour. Mr Biden said the Queen asked him what it was like living in the White House, and he replied "Well, it's magnificent but it's a lot of people!" 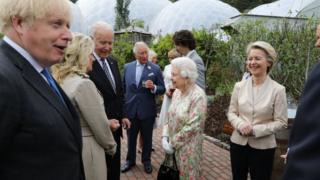 Getty Images
The Queen, with Prince Charles, briefly meeting the President and his wife at the Eden Project event

It's been a busy weekend for the Queen, as she briefly met world leaders at an event held at the Eden Project in Cornwall on Friday 11 June.

On Saturday, she also celebrated her 95th public birthday !

G7 summit: Sisters Poppy and Lavender have the info