One of Antarctica's largest glaciers is in danger of collapsing into the sea because the ice shelf that holds it in place is breaking apart.

The Pine Island Glacier covers 68,000 square miles in the West Antarctic, that's more than five times the size of Wales! It contains 180 trillion tons of ice and if it falls into the ocean, the average global sea level could rise by 50cm.

Why Antarctica is celebrating its birthday... kind of 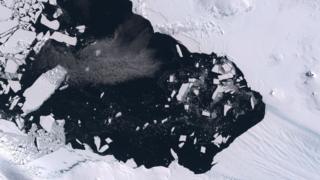 A glacier is a huge clump of ice that moves slowly over land. It's not unusual for glaciers to move and shift over time.

But from 2017 to 2020, large icebergs at the ice shelf edge broke off, and the glacier movement got even faster.

"The processes we'd been studying in this region were leading to an irreversible collapse, but at a fairly measured pace. Things could be much more abrupt if we lose the rest of that ice shelf."

Earth's ice is melting at a faster rate because the atmosphere and oceans are warming due to climate change, but it's not just ice melting that's the problem, the sheer speed and weight of the glacier moving, is now causing the ice shelf to tear apart.

"The recent changes in speed are not due to melt-driven thinning; instead they're due to the loss of the outer part of the ice shelf," Joughin said, estimating that 20 percent of the ice shelf has already been lost.

"The glacier's speedup is not catastrophic at this point. But if the rest of that ice shelf breaks up and goes away then this glacier could speed up quite a lot.

"The whole shelf could give way and go within a few years - I'd say that's a long shot, but not a very long shot," he added. 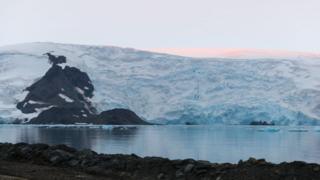 Getty Images
Glaciers have existed for thousands of years and are thick chunks of ice that move under their own weight
Why is this a problem?

The Pine Island Glacier, (which is not on an island or covered in trees), is one of two side-by-side glaciers in western Antarctica that scientists are worried about. The other is the Thwaites Glacier, which is about the size of Britain and 1km deep.

Isabella Velicogna an ice scientist from the University of California says: "Pine Island and Thwaites are our biggest worry now because they are falling apart and then the rest of West Antarctica will follow according to nearly all models."

Scientists have increasingly issued warnings over the huge amount of ice stored in Antarctica which, if it falls or melts into the ocean, will contribute to a rise of global sea levels by several metres - resulting in coastal flooding over the next century.

"These ice shelves won't be able to just grow back," says Robert DeConto, an expert in polar climate change at the University of Massachusetts.

"In the century after 2100 it's potentially catastrophic.

"If we did nothing at all to reduce emissions we could get 5 metres of sea level rise just from Antarctica by 2200, at which point you'd have to remap the world from space. It would be unimaginable."

Antarctica: How has it changed since it was discovered 200 years ago?