Ethiopia Tigray crisis: How the fighting started and why are people warning of famine? 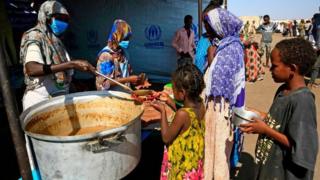 Parts of the Tigray region in Ethiopia are "on the brink of famine," according to the Antonio Guterres, who is the head of the United Nations.

The situation the country, which is in the east of Africa, will "only keep getting worse," according to Secretary-General Guterres, unless humanitarian access is improved.

The food shortages follow months of fighting in the area between Ethiopian forces and Tigray fighters linked to the Tigray People's Liberation Front (TPLF) - the political party in control of the region.

A famine is when a food shortage in an area reaches a particularly dangerous level. The United Nations have an official definition, but it simply draws attention to the size of the problem. The United Nations does not have the power to force it's member countries to send help once a famine is declared. 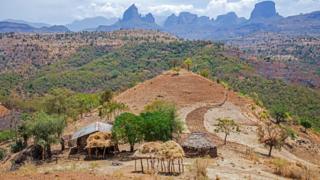 What is a famine?

A famine is when at least 20 per cent of households in an area face extreme food shortages with a limited ability to cope; acute malnutrition rates exceed 30 per cent; and the death rate exceeds two persons per day per 10,000 persons.

What do I need to know about Ethiopia?

Ethiopia is a country in the east of Africa, and s home to more than 90 different ethnic groups. The country is also home to some of the earliest known examples of human-life. In 2015 scientists discovered a jawbone said to be 2.8 million years old that helped explain how humans had developed.

The country is land-locked (meaning it has no coastline), but is home to rich farmland. A large portion of the country is known as the Ethiopian highlands, an enormous mountain range that is home to Lake Tana. The lake is a UNESCO biosphere reserve thanks to the fish, birds and fauna that live there. It is also one of the main sources of water for the enormous Nile River that runs north all the way to the Mediterranean sea.

More than 102 million people live in Ethiopia - to give you an idea of size, that's around 40 million more people than live in the United Kingdom. Several million people live in Addis Ababa, the country's capital city. The city is one of Africa's most important too, as it is home to headquarters for the African Union and the UN's regional commission for Africa. 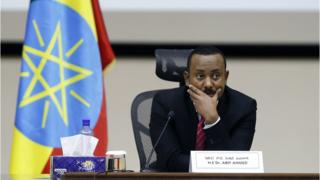 Getty Images
Abiy Ahmed has been Prime Minister since 2018
What's been happening in the country?

In 2018 Abiy Ahmed became Prime Minister. His appointment was a big change for the country as he was Ethiopia's first leader from the Oromo ethnic group.

There had been several years of protests against the government, and those in positions of power, and the Oromo group had been at the centre of those demonstrations. Ahmed promised to bring the country back together.

He also promised to end a long-running war with neighbouring country Eritrea. The countries fought a war over a disputed border from 1998 to 2000, but it took until 2018 a peace treaty to be agreed.

Prime Minister Ahmed was give given the Nobel Peace Prize for bringing about the agreement between the two countries.

However, less than a year after receiving the award, forces from Abiy Ahmed's government were battling with fighters from the TPLF about control of the Tigray region. 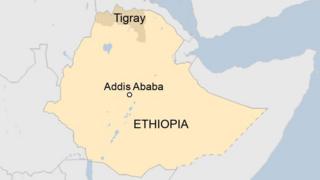 The Tigray region is in the north of the country
How bad has the fighting been?

The fighting has forced almost two million people to flee their homes in the area. The region was already 'food insecure' - meaning many people didn't have regular or secure access to the food they need for a healthy life.

The power struggle between the country's government and the region's former rulers has seen hundreds of people killed, It has also seen farms fought over with settlers from the neighbouring Amhara region reported to have travelled to the Tigray area to take control of farmland. 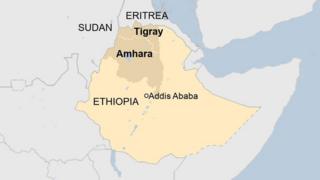 Amharan settlers claim this land belonged to them originally and it was taken from them when the TPLF were in power in the region.

The government in Amhara say they have taken control of western Tigray. People who have visited the region say they found street signs that had previously been in the Tigrinya language were now in Amharic. 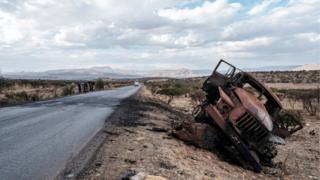 AFP
Tigray has been devastated by the conflict

For people living in the area the effect of the fighting has been devastating.

"We are civilians, our crops and cattle have been taken by the armed men," one farmer in his 60s said told BBC reporters in the region.

Another farmer, in his 40s, told the BBC: "We were eating small remains of crops that we managed to hide, but now we don't have anything. Nobody has given us any aid." 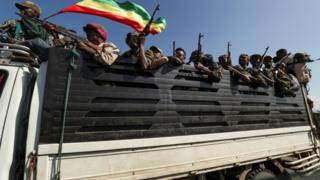 Reuters
Qafta Humera residents said Amhara militias were preventing them from leaving the area
Can people escape the fighting?

People in the region have told the BBC they are trapped and cannot flee.

"When we want to go to the place where there is aid all roads are blocked," the farmer in his 60s said.

He also said that some people are being asked to pay bribes they cannot afford if they try to leave the area. "Even if we try on foot if the militias from Amhara found us they force us to pay 4,000-5,000 birr [between £65 and £80] each."

Around 60,000 people are believed to have escaped to refugee camps in Sudan. The United Nations say that at the height of the fighting more than 1,000 people a day were crossing the border into Sudan. 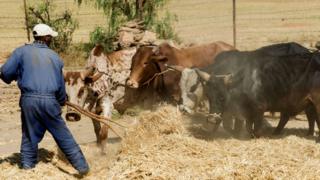 Getty Images
Many cattle have also been lost during the conflict
What's being done to help?

Currently, the UNHCR - the UN body that helps refugees - is working with authorities in Sudan to assist people in camps there.

Refugees are being offered shelter and provided with meals and water. People are also being screened for Covid-19 to try and prevent the spread of the disease among those fleeing the conflict and humanitarian crisis.

They have even recently started building a new camp that could house 30,000 people.

However, the United Nations' humanitarian chief Mark Lowcock says that, quite simply, "People need to wake up… The international community needs to really step up, including through the provision of money."