Pokémon: Boy who sold his collection to save dog gets rare gift 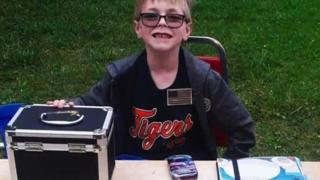 An eight-year-old boy in the United States has been sent some rare Pokémon cards because he sold his own special collection to save his dog.

Bryson and his family couldn't afford to pay $700 (£494) for treatment to help their pet, Bruce, who was suffering from a highly contagious dog virus.

So Bryson decided to set up a stall outside his home in Virginia to sell his treasured Pokémon cards and raise the money to help his pooch.

He told US local news station WCYB: "I know everybody likes Pokémon cards so I just decided to sell them." 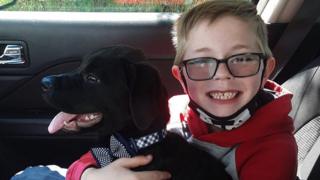 Kimberley Woodruff/Facebook
Bryson and his pet dog Bruce together

But the staff at Pokémon HQ in Washington state heard about Bryson's sacrifice, so they sent him some really rare cards as a gift.

They also sent a letter saying: "Hey Bryson, we were so inspired by your story about selling your cards for your dog's recovery, these are some cards to help you replace the ones you had to sell."

Bryson's mum also created an online fundraising page to help raise $800 (£564) to cover the dog's treatment and other costs.

However, the donations have since reached more than $5,400 (£3,808), which the family will use to help pay for Bruce's future vaccinations and other sick dogs in the community, according to WCYB.

Pokemon Unite: What is the game all about and why don't some fans like it?