Israel-Gaza: How is life restarting after ceasefire? 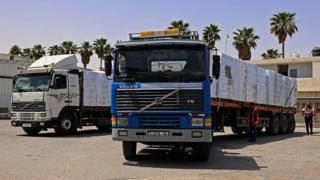 Trucks carrying aid items, including medicine, food and fuel have begun arriving in Gaza, after a ceasefire between Israel and Palestinian militants came into effect.

The deal to stop fighting was agreed with help from the Egyptian government and the United Nations.

Team of mediators - who talk to both sides - are seeking to cement the truce and prevent more violence in the longer term.

An Egyptian team was in Israel on Saturday, while the US Secretary of State Antony Blinken could visit the region next week.

Normally Israel strictly controls any travel in or out of Gaza, but a crossing into Gaza - called Kerem Shalom - has been temporarily opened by Israel.

Read more about the situation In Israel and Gaza

The World Health Organization (WHO) have called for the creation of corridors for injured people to be evacuated.

It says more than 30 health facilities in Gaza have been hit during the fighting, and that road damage has been stopping ambulances reaching people in need of medical help.

More than 250 people were killed in the 11-day conflict, most of them in Gaza. 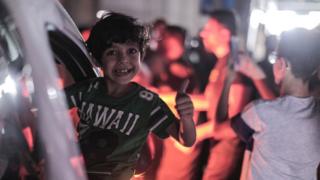 Both Israel and the militants in Gaza claimed victory, but most people in both Israel and Gaza are just happy for the fighting to have stopped.

Many are also worried that the peace will not last for long and another conflict in the region is just a matter of time.

For now they are starting to try to get used to living their lives without the threat of attacks from the air.

What is the situation for people in Gaza following the ceasefire?

The ceasefire means for the first time in nearly two weeks people have been able to go outside in relative safety.

Gaza's streets returned to being filled with people just hours after the news broke.

But many people have returned home to scenes of devastation, with many without water or electricity and others finding their homes completely destroyed.

On Thursday, Gaza's housing ministry said 1,800 housing units were unfit for living and 1,000 had been destroyed. Officials say reconstruction might take years. 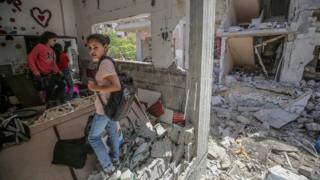 EPA
Aid agencies are appealing for millions in aid donations

More than 100,000 people had to flee their homes during the fighting with many families taking shelter in schools.

The UN agency for Palestinian refugees (Unwra) said it wants to help tens of thousands of displaced people, and that it was urgently seeking $38m (£26m) in aid.

"The damage inflicted in less than two weeks will take years, if not decades, to rebuild," said Fabrizio Carboni, the Middle East director for the International Committee of the Red Cross (ICRC).

What is the situation for people in Israel following the ceasefire?

In southern Israel, people celebrated the ceasefire and families emerged from bomb shelters where they have been staying during the night time.

Emergency restrictions have been lifted while all schools are due to reopen on Sunday.

Airlines are also resuming flights to and from Tel Aviv in the coming days, after travel to the area was cancelled during the conflict. 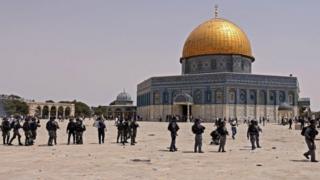 Many Israelis in towns hardest hit by rockets from Gaza believe the fighting ended too soon - and that the Israeli army should have done more to prevent further attacks by militants in Gaza.

The conflict saw Israel targeted with some of the heaviest rocket barrages it has ever faced.

The truce hasn't meant calm in Jerusalem, with renewed confrontations between Palestinian worshippers and Israeli security forces on Friday outside al-Aqsa Mosque - the site where tensions that started the latest fighting, began.

What have world leaders said? 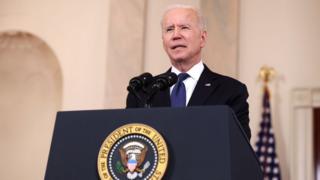 US President Joe Biden said a two-state solution was the only way to resolve the conflict.

He said there could be no peace unless the region recognised the right of Israel to exist. He also said the US would organise international help to rebuild the damage in Gaza.

EU foreign policy chief Josep Borrell said EU countries were "appalled" by the loss of life in the last 11 days, and pledged the EU's full support for Israel and the Palestinians in finding a political solution. 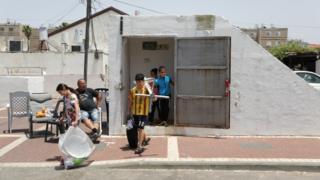 UK foreign minister Dominic Raab tweeted: "All sides must work to make the ceasefire durable and end the unacceptable cycle of violence and loss of civilian life."

The United Nations, the UK and others are pushing for renewed talks between Israel and the Palestinians.

Israelis and Palestinians have been fighting over Gaza on and off for decades, and they point out that so long as the root causes of their conflict remain unsolved there is always the chance fighting will break out again.

Israel and Palestinians agree to ceasefire and to halt fighting

Israel-Gaza conflict: Children on both sides reflect on life there