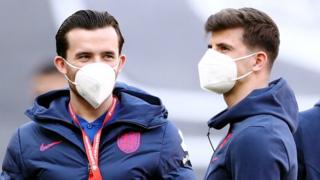 Ben Chilwell and Mason Mount will miss England's final Euro 2020 group game with the Czech Republic as they self-isolate because of a risk of Covid-19 exposure.

The England players have been told to self-isolate up to and including 28 June after coming into contact with Scotland's Billy Gilmour.

They were pictured hugging their Chelsea teammate after England's 0-0 draw with Scotland on Friday night.

Gilmour has since tested positive for Covid-19 and will miss Scotland's final Euro 2020 group game against Croatia on Tuesday.

Chilwell and Mount have both been tested and have come out as negative but are isolating as a precaution under NHS England guidance.

Wales through to Euros last 16 despite defeat

The Football Association confirmed in a statement that Chilwell and Mount are required to isolate up to and including 28 June.

Speaking before the length of the isolation period was confirmed, England manager, Gareth Southgate, described the news as very "disruptive".

As well as missing the Czech Republic game, Mount and Chilwell could miss England's last 16 match depending on results.

If England finish second in their group, then their last 16 game takes place on Monday 28 June but if they win the group they play a day later and so the pair would be eligible.

Finishing third would see England play on either 27 or 29 June dependant on the results in other groups. 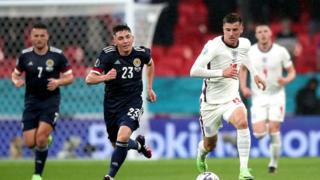 Public Health England (PHE) guidance says that someone could be considered a close contact and might have to self-isolate if they had a face-to-face conversation within one metre, or had been within two metres of someone for more than 15 minutes who tested positive for Covid-19.

A PHE spokesperson said: "PHE is working with the FA to identify close contacts of Billy Gilmour and any risk to other players and staff."

The Scottish FA (SFA) says PHE determined that none of the other Scotland players had to self-isolate as there had been no close contact.

But PHE said there had been no detailed discussions with the SFA.

The entire England squad had lateral flow tests on Monday afternoon and all were negative.

Euro 2020: Wales through to last 16 despite Italy defeat