International calls for the end of violence between Israel and Palestinians in the Middle East are continuing to grow.

US President Joe Biden has voiced his support for a ceasefire after eight days of violence between Israel and Palestinian militants in Gaza.

The United Nations (UN) Secretary-General António Guterres warned that further fighting could lead to "an uncontainable security and humanitarian crisis" and called for an end to the "utterly appalling" violence.

But there have been no signs of that happening yet as the fighting between the two sides has entered its second week.

Israel carried out dozens of air strikes on the Gaza Strip on Monday, after Palestinian militants fired rockets at southern Israeli cities.

The raids on Gaza were some of the heaviest seen since the fighting began a week ago.

Here are some tips about what to do if you are feeling sad about what you've seen, heard or read.

What has been happening? The fighting began after weeks of rising Israeli-Palestinian tension in occupied East Jerusalem that led to clashes at a holy site respected by both Muslims and Jews.

The Israeli military said more than 50 warplanes carried out a 20-minute attack on the Gaza Strip shortly before sunrise on Monday.

Palestinian officials in Gaza said the strikes had caused widespread power cuts and damaged hundreds of homes. The UN has also warned of fuel shortages in Gaza which could lead to hospitals and other facilities losing power.

More than 1,200 people have been injured in Gaza, and 197 have died, according to the Hamas-run health ministry.

Ten people have been killed in rocket attacks on Israel in the past week.

Israeli officials say they have seen the highest ever number of rocket attacks in that time, with more than 3,000 rockets launched in total by Palestinian militants.

The country's Iron Dome defence system is said to have blocked 90 percent of the rockets but some have caused damage to cars and buildings.

Why are both sides fighting each other?

The latest violence is part of the ongoing conflict between Jewish and Palestinian Arab communities, which has gone on for decades.

Their dispute mainly began over who the land should belong to and how it should be divided up after the creation of the modern state of Israel in 1948.

Today, tensions are often high between Israel and Palestinians living in East Jerusalem, Gaza and the West Bank.

Gaza is ruled by a Palestinian militant group called Hamas, which has fought Israel many times. Israel and neighbouring country Egypt tightly control Gaza's borders to try to stop weapons getting to Hamas. 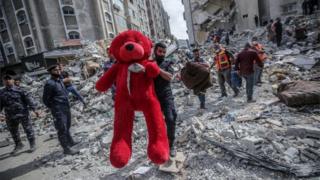 Palestinians in Gaza and the West Bank say they're suffering because of Israeli actions and restrictions. Israel says it is only acting to protect itself from violence from Palestinian groups like Hamas.

Things have got worse since the start of the holy Muslim month of Ramadan in mid-April 2021, with nightly clashes between police and Palestinians.

The threatened eviction of some Palestinian families from their homes in East Jerusalem by Israeli authorities has also caused rising anger.

Will there be a ceasefire to end the violence? 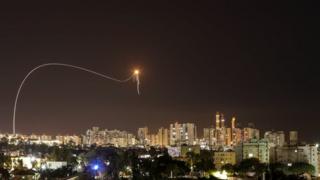 Reuters
Israel says more than 3,000 rockets have been launched by Palestinian militants over the past week

According to BBC correspondent Paul Adams, the fighting is not expected to be over any time soon.

He explains: "Israeli Prime Minister Benjamin Netanyahu said the attacks are continuing with 'full force' and will 'take time'."

Local reports suggest Hamas has been offering some kind of ceasefire for several days, only to be rebuffed by Israel, which clearly wants to inflict as much damage as it can on the militants before the fighting is finally brought to a close.

US President Joe Biden has publicly backed Israel's right to self-defence, but he has said his administration is working with all parties to achieve a stop to the violence.

"My hope is that we'll see this coming to conclusion sooner rather than later," he said of the fighting last week.

United Nations calls for calm between Israel and Palestinians