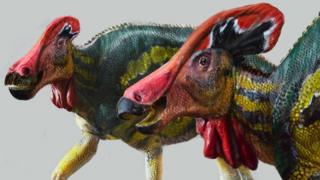 INAH/Luis V. Rey
Artist's impression of the dinosaur Tlatolophus galorum with a crest on its head

Scientists in Mexico have identified a new species of dinosaur after discovering its ancient remains almost 10 years ago.

It has been named Tlatolophus galorum, Mexico's National Institute of Anthropology and History (INAH) announced.

The new species was identified as a crested dinosaur after 80% of its skull was unearthed, allowing experts - known as palaeontologists - to compare it to other similar dinosaurs.

The research began in 2013 with the discovery of a 72-million-year-old fossilised tail in Coahuila, north-west Mexico.

Want more dinosaurs in your life? 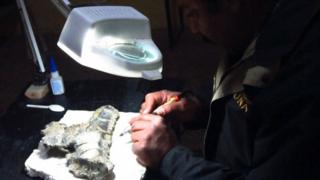 UNAM
A scientist working on the fossil of the crested dinosaur

"Once we recovered the tail, we continued digging below where it was located. The surprise was that we began to find bones such as the femur, the scapula and other elements," said Alejandro Ramírez, who was involved in discovering the fossils.

The scientists - including specialists from the National Autonomous University of Mexico (UNAM) - were later able to collect, clean and look at other bones from the front part of the dinosaur's body.

The palaeontologists found the crest on the dinosaur's head was 1.32 metres long.

They also uncovered other parts of the skull including the lower and upper jaws, palate and the neurocranium, where the brain would have been.

Megalodon tooth found - but what is a megalodon?

Titanosaur: Is this the largest dinosaur ever to have existed?